Polacanthus is Britain's best-known ankylosaur. Despite this, the entire skeleton has not yet been found, and indeed, the skull is very poorly known. It was found in the Isle of Wight, and was contemperaneous with such dinosaurs as Eotyrannus and Neovenator, with the latter possibly large enough to have been a potential predator. 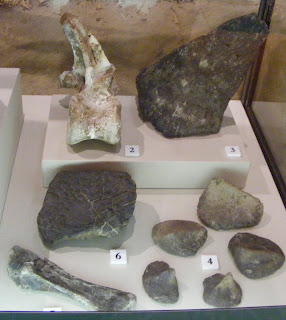 One of the most notable features of Polacanthus, and its close relatives Gastonia and Mymoorapelta of North America, is the sacral shield, a large plate of armour covering the lower back, hips and upper portion of the tail. This, like the rest of the armour plates, was made of dermal bone, hence it was embedded in the skin and not attached to the skeleton. 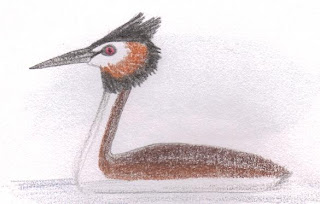 One of my favourite freshwater birds is the great crested grebe. It's always a thrill to see it on medium-sized to large bodies of water, even in areas very close to human habitation (the photographs that follow were taken in Hyde Park, very close to the centre of that little town called London). They tend to stick to the centre of such water bodies, mainly because they dive for their food, but also because they're a little shy and wary of humans. 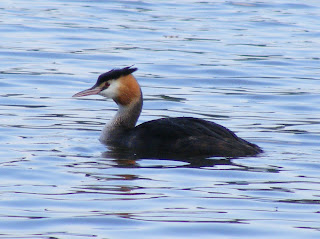 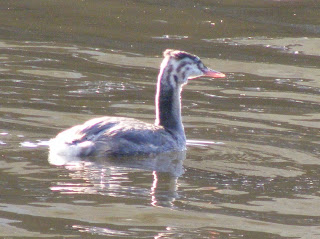 The chicks are endearing little things; when very young they climb aboard one of their parents' backs and stay there, as adult grebes do not make nests. What they are known to do, however, is collect twigs as 'presents' to each other, a behaviour I have witnessed in early spring. The young have a bold striped pattern, which remains on the face until late in the year, when they moult into the adult winter plumage. 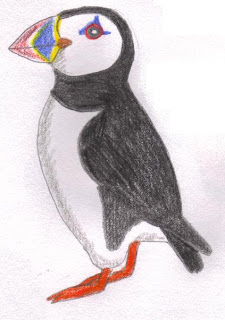 The puffin is one of the most recognisable of birds; short stubby wings, black and white plumage and the tri-coloured bill reminiscent of a toucan, not to mention the triangle around the eye giving it a clown-like air. Puffins are auks, with relatives including guillemots (or murres) and razorbills. Most are unknown to the general public, except when a wandering auk from the other side of the globe ends up in British waters and has its picture and ultimate fate published in tabloids. The other infamous auk is the great auk (Pinguinus impennis), pushed to extinction in the 19th Century. 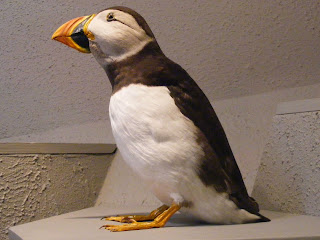 The Atlantic puffin is one of three species in the genus Fratercula ('little monk'), and the only one that breeds in Britain. Colonies exist on deserted cliffs and islands, and are quite approachable, if only for the reason that they will only fly if they have to, due to their short wings. Despite this, they are capable flyers, and are able to take off and land proficiently, in order to reach their clifftop nest. The nest is created in a burrow, but they don't create them themselves. Puffins have declined significantly in number in the UK and elsewhere in Europe, partly due to hunting (it is an Icelandic delicacy), but overfishing is also to blame.

Also, isn't your comment about the sacral shield made of dermal bone a little redundant? Aren't the spines and scutes made of dermal bone too? They were also embedded in the skin, not attached to the skeleton...unless I'm missing something or misinterpreting the term "dermal bone."

I just got the Polacanthus section in "Dinosaurs of the Isle of Wight." Awesome little critter! I wish more material was known. On an unrelated note, I find thyreophorans especially hard to draw, especially ankylosaurs, because their proportions are so bizarre.

As I've said before I think, stegosaurs are easy to draw, but ankylosaurs are definitely more challenging!