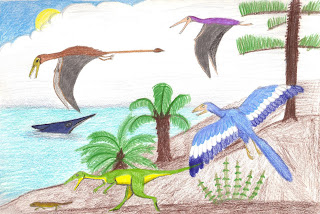 Here is my first attempt at creating a realistic Jurassic scene in coloured pencil. What you see is an example of the animals and plants that lived in Bavaria during the Jurassic (I am not too sure if the plants pictured were found there at that time, but I am not a palaeobotanist, nor do I strive to be!).

In the air we have Rhamphorhynchus (the flying reptile with a long tail and a brown body), and behind it is Pterodactylus (with purple “fur”). In the sea is Aegirosaurus, an ichthyosaur. Flying in the foreground with blue and white plumage is Archaeopteryx, and running on the ground are Compsognathus chasing Bavarisaurus. The plants are, from left: a cycad; a tree fern; a horsetail; and a Norfolk Island pine.

Solnhofen is the name of a town in Bavaria in southern Germany. It is in a limestone quarry near to Solnhofen that the fossils of the above animals were found, some in almost immaculate condition. It is believed that Bavaria at the time was a tropical archipelago with saltwater lagoons. The lagoons would harbour few bacteria as the salinity of the water would have been too high to support even brine shrimp. As a result, any animal that fell in (alive or dead) would have been well preserved.
Posted by m at 16:01 No comments: 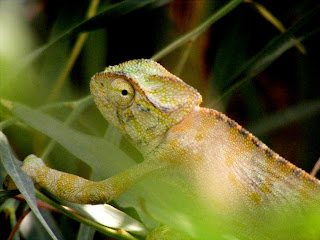 Chameleons are (said very scientifically) a cool bunch of animals. They are an instantly recognisable group of lizards: they are most well known for their ability to change colour at will, and their loopy eyes that can face any direction independently of each other. They are also known for their super-elastic tongue and unusual grasping feet and curly prehensile tail.

The hotspot for chameleon diversity is Madagascar, with about 70 species including the world’s smallest and the world’s largest. Elsewhere they are found in Africa, southern Europe and Asia. The European (or common) chameleon pictured is found in Greece, some Greek islands, Malta, Portugal, Spain, Cyprus, North Africa and the Middle East as far as Iran, and is often split into four subspecies: the Cyprus population would belong to C. c. recticrista. 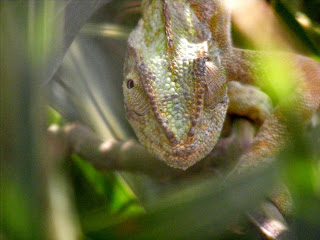 Long time no blog! In celebration of my voyage to Northern Cyprus earlier this month, I will be blogging on a variety of the natural wonders of that country. Today’s post will be on the Cyprus pied wheatear (Oenanthe cypriaca). 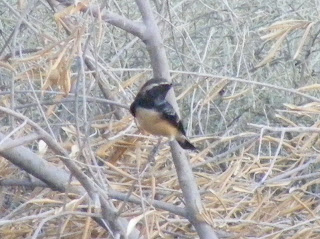 The Cyprus pied wheatear is a small bird related to the robins and chats such as stonechats and whinchats. It is one of only two so-called breeding endemic species of bird in Cyprus. This means that they spend the summer months (up to October it seems) only in Cyprus. They migrate to Sudan to spend the winter. The other bird is the Cyprus warbler (Sylvia melanothorax), which I unfortunately didn’t see. 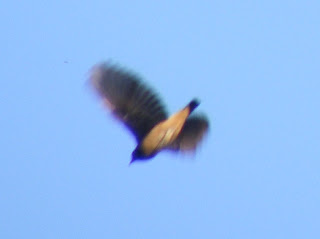 This bird is a female, you can see a dusky cap with white border (more white in the male), and buff-rufous underparts which are less extensive in males.