I want to draw attention to a really interesting movie I watched this past weekend, called 'The Hide'. Its relevance to this blog is that it's a thriller set in a birdwatching hide in the English countryside. It was on Film Four at some point last week, and has also been released on DVD.

DVD cover of "The Hide"

The tagline "No crime stays hidden forever" is a good taster as to what to expect from the film, featuring only two characters (ornithologist and twitcher Roy Tunt, played by Alex Macqueen, and "Dave John", played by Phil Campbell), and set in a single scene. This theatrical quality is not accidental; the film, directed by Marek Losey, is based on a play called "The Sociable Plover". 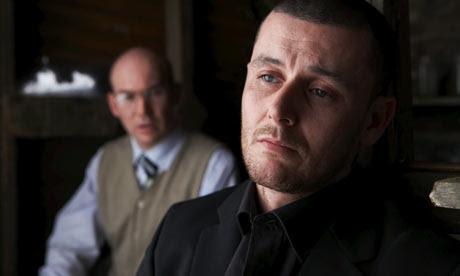 Without revealing any plot twists or surprises, here follows a brief summary of the film: ornithologist and obsessive-compulsive twitcher Roy Tunt is seen setting up his equipment and supplies for a day in a hide out on the Suffolk flats. He mumbles to himself and writes his sightings on the chalkboard in the hide. In walks the second character, looking shifty; he is told by Tunt that this is a private hide. The second character, known to us and Tunt only as "Dave... John", obviously a pair of pseudonyms, makes himself comfortable. His ignorance of birds and the hobby of birdwatching is made clear, and the pair become somewhat acquainted. The subject of Tunt's quest, the final tick on his British bird list - the sociable plover, is discussed. This odd couple become involved in a thrilling plot twist that I won't reveal here.

The acting by Macqueen, known for his occasional comedy acting, and Campbell, is faultless, with definite moments of humour interspaced between the awkwardness and seriousness between the characters. The humour, while probably more easily appreciated by seasoned birdwatchers, isn't restricted to in jokes.

If anyone has seen this film and wants to discuss any part of it (especially the ending and unseen aftermath), go ahead and speak up in the comments, just put *SPOILER ALERT* or similar announcement before your post!
Posted by m at 14:49 1 comment: