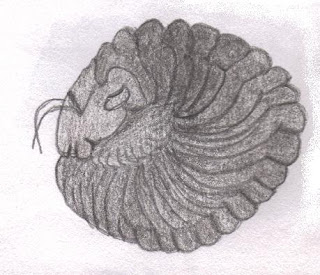 Quinquecosta is a trilobite of the family Pliomeridae, belonging to the order Phacopida. The phacopidans were capable of rolling into a ball, most likely for defence, and many fossils of this type of trilobite are found in such a shape. They had large eyes with visible lenses, the schizochroal eye, yet members of the Pliomeridae had the more typical holochroal eye, with much smaller lenses which are not separate from each other. 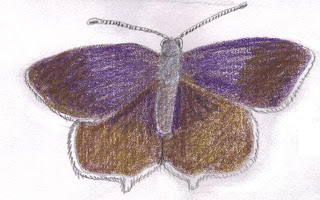 This is a female purple hairstreak: although she is wonderfully purple, the male is even more so. I wasn't aware of this when I was drawing Q for this alphabet! Quercus is Latin for 'oak', and the name reflects this insect's lifecycle. The female lays her eggs on oak buds, and the larva lives inside the buds. The adults then spend much of their time in the canopy of mature oak trees. The genus is also known as Neozephyrus, but that doesn't begin with 'Q', does it? 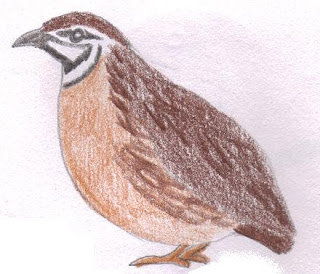 The common quail is Britain's only native migratory game bird. It only spends the summer months in the UK, but is often kept as a farm bird for its flesh, but more frequently for its eggs, which are considered a delicacy. 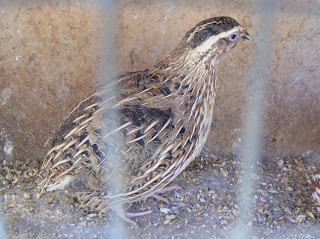 Quails are hard birds to spot in the wild. They are naturally shy and very cryptically-coloured, but can betray their presence with their distinctive call, often transcribed as 'wet my lips, wet my lips!' I don't see the similarity myself. 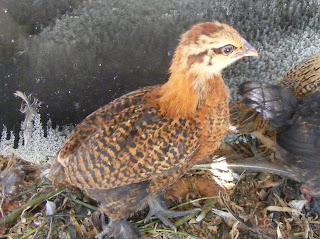 Quails of the genus Coturnix are commonly kept as ornamental and farmyard birds, with Asian members of the genus (Chinese, or blue-breasted quail, C. chinensis, and Japanese quail, C. japonica) the most popular. In Europe, however, it is predominantly the common quail which is kept.

Next week, R: a long-tailed purple pterosaur, a cryptic gruiform and Britain's national bird.
Posted by m at 11:24

Walked around the 'reservoir' at Gecitkoy a week ago and did not hear any quails.

Perhaps they are keeping their heads down in hunting season!