Photo of the Day #6 - Spectacled Owl 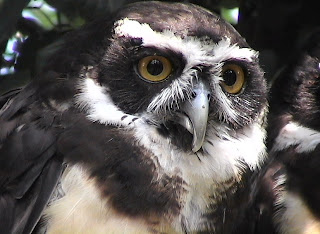 Photo of the Day #5: Axolotl 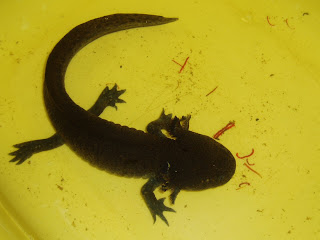 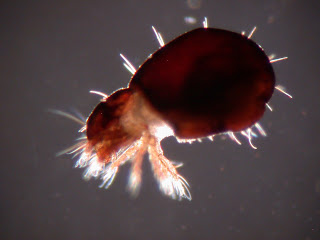 A little story behind the photo. I didn't collect this specimen, but I identified it to species from an assortment of terrestrial invertebrates from Henderson Island. I worked on oribatid mites for my undergraduate dissertation (BSc [Hons] Natural History & Wildlife Biology) at Anglia Ruskin University, Cambridge. The mites and other invertebrates were provided by University of Cambridge.
Posted by m at 12:47 No comments: 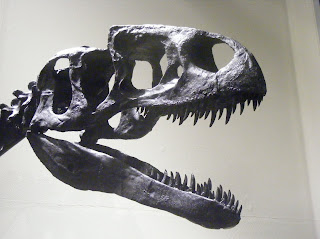 Photo of the Day #2 - American Alligator 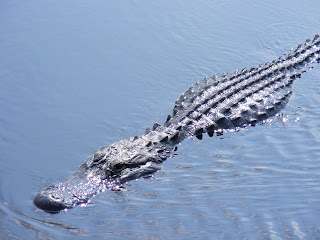 Meeting with a Spinosaurus

Meeting with a Spinosaurus
by Mo Hassan
May 2008
Last Monday, I left work a little later than usual. Two dinosaur eggs were excavated in Egypt a little more than a month ago, and they were brought to the museum. Along with a few other palaeontologists, I was trying to identify which species they belong to. Unfortunately, there were no diagnostic features, and lots of potential suspects. I had the idea of sampling the shell for radioisotopes but I had no luck. I hadn’t eaten all day from the excitement and I couldn’t resist the hunger pains any more. What happened next could either be the stupidest or the most serendipitous thing I have ever done.

I guess I just forgot to put one of the eggs back in the drawer as I was distracted by the thought of dinner. The egg was still in the radioisotope lab which contains, amongst other contraptions, a gamma-ray emitter. Tuesday morning I was first in – I was eager to test some new hypotheses I came up with overnight, could it be a Carcharodontosaurus or even an Ouranosaurus? I then realised that I had left half of our precious clutch in the radioisotope lab; the door was locked and I didn’t have the key. I bit my fingernails to the quick while I waited for a nuclear technician to let me in. A whole hour passed before I saw one approaching the lab. I asked why I couldn’t get in,
“You’re not authorised entry,” he replied.
“I got in yesterday, it was unlocked!”
“It was unlocked? I locked it last night, I’m sure of it, well, I think I did.”
“It looks like you and me are both in a bit of trouble, aren’t we.” The door didn’t open.
“That red light means the gamma-ray emitter is on – there’s a dangerous amount of radiation in there!”
“Oh no, the egg!” I exclaimed in a high-pitched squeal.
“Well that egg will be scrambled by the time the emitter stops working, it must have been going all night.” The light went out after five minutes of silence, and the door lock clicked open (I would say steam came pouring out of the doorway, but that sounds too sci-fi).

I entered to see the egg exactly where I left it, between the gamma-ray emitter and the mass spectrometer. It looked untouched, except for the square millimetre I cut out of the shell to examine it under the electron microscope. That square millimetre looked a bit bigger than it did yesterday, I thought to myself. Oh no, it’s hatching!

By this point, the technician is screaming and has set the fire alarm off in the corridor. I snatched the egg and ran to the nearest fire exit and ran home. Well, I briskly walked to the bus stop, I can’t run that fast. When I got home, I put the egg on the kitchen table and waited for the moment when the little beastie’s head popped through the eggshell and saw the world for the first time. As it happens, this only took five minutes. As the baby reptile stood up for the first time in its life, I noticed it had a fully-formed sail on its back, and a long snout full of sharp, serrated teeth that showed when it yawned. This was my first meeting with a Spinosaurus.

I watched as it walked, then ran, around the kitchen table, and I noticed how similar it looked to reconstructions of adult spinosaurids I had seen. The radiation must have made the embryo suddenly mature. I cannot think of a better explanation, but after all, science does do the unexpected from time to time. As time passed, and I was frantically taking pictures, video footage and notes all at once, the still very little Spinosaurus was getting slower and more awkward in its movements. Could it be dying? Before the horror of what I was thinking could sink in, the dinosaur crawled inside the empty eggshell and collapsed. The life of a great beast abridged and summarised as if it was an hour of televised programming.

Despite having seen a living non-avian dinosaur and being the only human being to do so, I feel strangely dissatisfied with what I witnessed. There are so many unanswered questions, but I have added more to the list. Oh well, I must get writing the paper on this bizarre moment in geological time, when man meets theropod for the first time ever.


This story was created for Laelaps' blog (Boneyard #20), and was heavily influenced by Jurassic Park and Honey I Blew Up The Kid. Any similarity to any persons or theropods living or dead is purely coincidental, accidental, and just plain mental... this is probably the least accurate scientific text I have ever written. Bear that in mind please when you comment! Thanks for reading.
Posted by m at 12:28 2 comments: 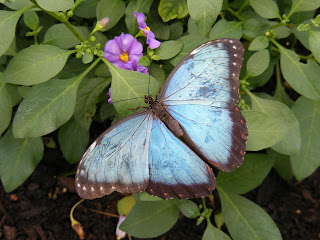 Well, this is the first post to "The Disillusioned Taxonomist" blog! Nothing much to say yet, but hopefully I will update with pictures, and within the next couple of week, a palaeontology-related story!
Posted by m at 19:25 No comments: