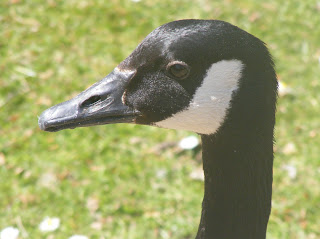 Apart from the mallard (Anas platyrhynchos), the most ubiquitous anseriform (the term used to refer to ducks, geese, swans, and their kin) in British ponds, lakes, rivers, canals, and reservoirs is the Canada goose. The mallard is a native bird, but the Canada goose, as its name suggests, is North American in origin. It is a large bird, close in size to the smaller swan species, and is a vocal one too: gaggles (or skeins if they’re airborne, don’t forget that!) honk loudly. 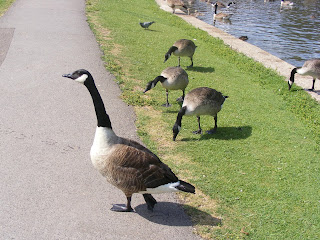 Canada geese were first introduced to Britain in the late 17th Century to St. James’s Park in London. Today, the park still boasts an impressive array of exotic waterfowl, including pelicans, but back then it was at the wishes of King James II to own flocks and gaggles of birds from other lands. The Canada geese escaped and bred, and they spread to all parts of Great Britain in decades. 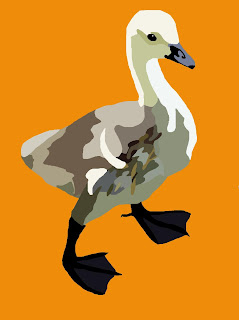 I was unfortunate (or fortunate, depending on how you look at it) enough to witness a young coot (Fulica atra) being drowned by a Canada goose. The goose was most likely being protective of its own offspring, a chain of eleven goslings taking up the rear of the two parent birds. If this happens on a regular basis, the geese could be responsible for declines in the population of other birds. I reported my concern to the RSPB (Royal Society for the Protection of Birds) at the time, but they said there was nothing that could be done with relation to culling the goose population, despite them being detrimental to other, native, bird species. It is now legal (since last year) to shoot Canada geese without a license, as well as several other invasive species. 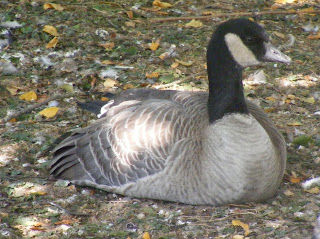 Occasionally, the odd truly wild Canada goose enters the UK, within groups of migratory geese. Some of these belong to a different species (some consider it just a subspecies), the cackling goose, which is recognised by being smaller and with a white ‘collar’ at the base of the neck. The cackling goose is native to arctic Canada and Alaska, spending the winter further south towards Mexico. The British populations of Canada goose are non-migratory.
Posted by m at 21:15 No comments: 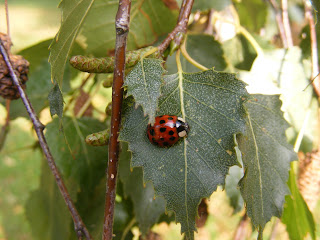 This is hopefully the first in a series of posts about species of animal and plant that are not native to the British Isles but have become an established part of the flora and fauna, at least in certain specific localities. Harmonia axyridis goes by many names: its most common name in the UK is the harlequin ladybird, because of its black, white, and red or orange coloration which resembles a clown’s make-up. Elsewhere, it is known as the Asian lady beetle, or Japanese ladybug.

A native of eastern Asia, and with close relatives in Australasia, the harlequin ladybird has invaded many other parts of the world, most notably North America and western Europe. It was introduced to North America as a form of biological pest control, but numbers quickly grew out of control. It was first found in the UK as recently as 2004, where it was first found in East Anglia. Since then, the spread has been rapid, reaching Scotland in 2007, and the species is now ubiquitous in the southeast of England. They are often a cause for alarm when large numbers congregate in sheds, outhouses, and even indoors during the autumn into winter, and as they become active once the weather becomes warmer, they make their presence known by flying around and bumping into windows. We have an invasion of harlequins at the Bruce Castle Museum where I work, in at least two of the rooms, one being a toilet. 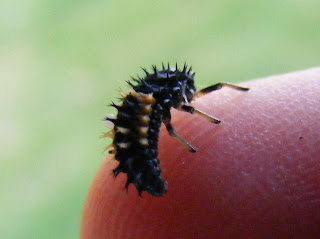 The lifecycle of the ladybird consists of four stages: egg, larva, pupa, and imago (adult). There are few people who can’t recognise an adult ladybird (identifying them to species is another story altogether though), but the larvae, looking so different to the adults in shape and coloration, are less well known. The eggs look like small orange balls, and the pupae like a smoothed-over version of a larva, often found stuck to a leaf, where its warning pattern of black and orange is enough to deter would-be predators. 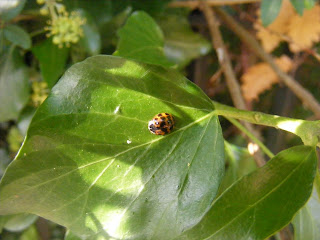 There are three recognised colour morphs of the harlequin ladybird in the UK. The above photo is of the succinea morph, which has a red or orange background and many black spots. The spectabilis morph has four red spots on a black background, and the conspicua morph has two large red spots on a black background, Other morphs are present in the native and North American populations, but these are the only ones present so far in Britain. 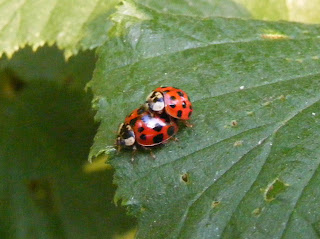 The advice I was given a few years ago as to what to do if I found a harlequin ladybird (then quite a rare occurrence, I didn’t see my first one until 2006, I think) was to humanely despatch it. Usually that involves the heel of a shoe. I’m now seeing so many, and they are breeding so rapidly, that it’s proving impossible to do such a thing to all of them. Squashing a few ladybirds in the centre of the area they have spread from is hardly going to be effective.
Posted by m at 19:59 2 comments: 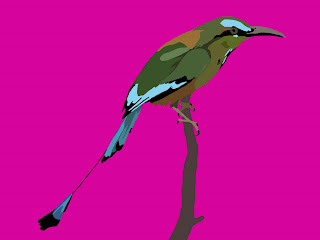 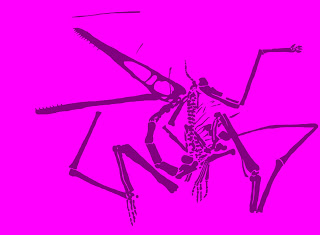 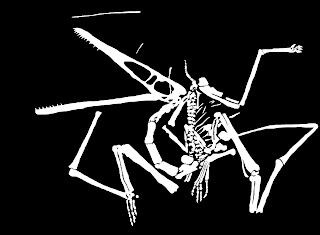 Pterodactylus antiquus in black and white 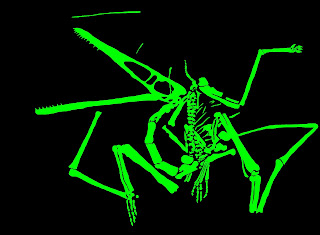 I felt inspired to create some more pop art. The Pterodactylus took me about 7 hours in all... recolouring them only takes a couple of minutes. Anyone got any ideas for other colour combinations that would look cool?

I might give a tutorial one day on ART Evolved, if anyone's interested in seeing how I do this using only primitive Windows technology ... does that sound like a good idea?
Posted by m at 20:05 2 comments: 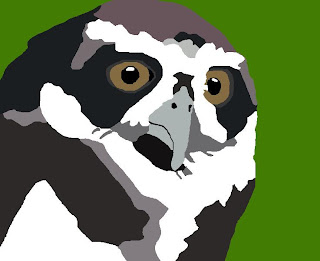 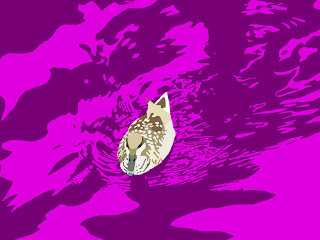 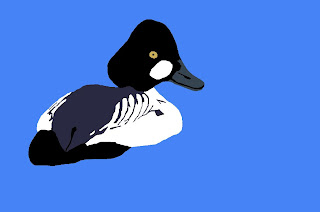 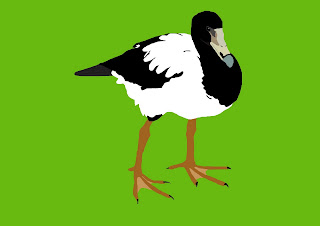 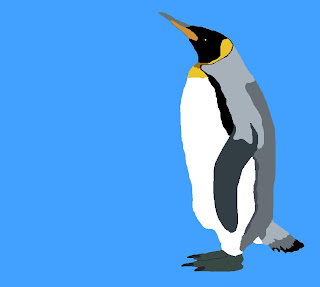 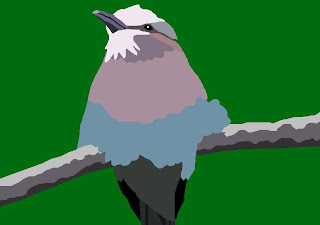 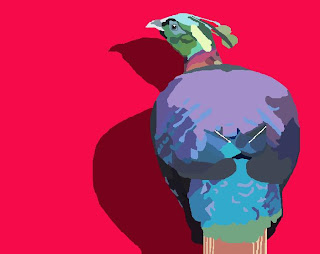 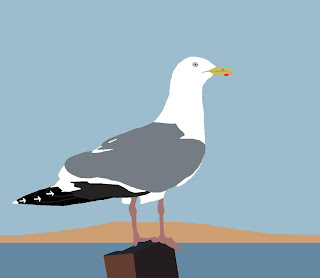 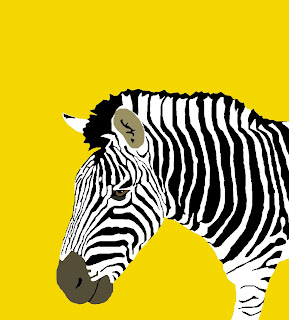 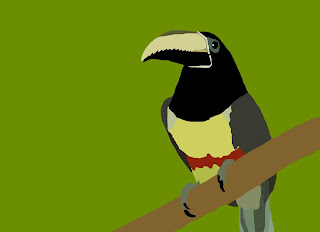 A series of popart-style illustrations for you, created some years ago. I used to really enjoy creating these, using nothing more than a digital photograph and MS Paint, and plenty of patience. If these are popular, I'll post some more.
Posted by m at 17:06 3 comments: