It's a Hawaiian goose, or nene, gosling. 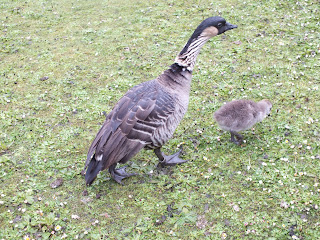 The hint in the photo was the half-webbed, or semipalmate, feet. The goslings are growing fast and are as of yesterday almost the same size as their parents.
Posted by m at 10:58 No comments:

Why I'm NOT boycotting Eurovision 2012

I don’t normally make a habit of using this blog as a platform for my political opinion (in fact this might be the first time, I can’t remember), but since I feel quite strongly about human rights, LGBT rights, and camp pan-European song contests, I will make an exception to explain why I won’t be boycotting the 57th Eurovision Song Contest which takes place this Saturday in Baku.

Until I watched Panorama: Eurovision’s Dirty Secret, an excellent piece of investigative journalism by the BBC, last night, I was quite ignorant of the plight of the Azeri people, especially those who speak out against the corrupt government. Journalist Paul Kenyon interviewed several protesters who were horrifically treated and have had to seek exile in order to avoid even worse torture. Despite legalising homosexuality in 2001, same sex unions are still not recognised, and many Azeri people feel uncomfortable being openly gay due to the threat of persecution. Several European countries have officially boycotted the event: Armenia, a long time foe of the neighbouring Azerbaijan, has pulled out altogether, as has Poland. So why am I still watching?

Until I came out as gay two years ago, I never admitted to enjoying watching the song contest, as doing so would have most likely automatically outed me. I watch for several reasons:
So why deprive myself of this multi-level enjoyment only to be heard by no-one? There are more productive ways to get heard: blogging about it is a start, as is signing a petition (such as here and here) to the Azeri government or to your own government, pleading to them to stop the unjust treatment of dissidents or the economic/ political support of a nation that allows this to happen.

Comments welcome as usual. Tell me, will you be watching this year?
Posted by m at 10:37 No comments: