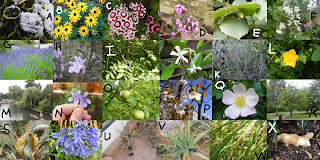 This is a (hopefully) fun little quiz that links plants with celebrities. Each of the twenty-four descriptions below match up with one of the plants pictured above (click to enlarge). Each person is named after a plant. For example, if one of the clues read: “I am the lead character in an American teen drama starring Kristen Bell”, the answer would be Veronica Mars. The picture of a speedwell (genus Veronica) would then be matched up with the clue, i.e. 1-A. The names are either first or surnames (not both), and the plants are either common or generic names, with one example of a specific name (one that is well known). In some cases, the plant’s full name is not the answer, only a part of it, e.g., there might be a Stanley Flower or a Tree of Barbara. You can comment here to answer, or on whichever social network site you see this on, or just wait for the answers which I will reveal at some point. Have fun!

1. I am a comic strip character best known for being the girlfriend of a spinach-loving strongman.
2. I am a female British politician for the Labour party who served as Secretary of State for Communities and Local Government from 2007 to 2009.
3. I am an American actress best known for my role in Basic Instinct.
4. I was an American actor who died at the age of 23, known for my role in the movie Stand By Me.
5. I was an American singer and actress best known for the song Mambo Italiano and my famous acting nephew.
6. I am a member of the British Royal Family and married Catherine Middleton in 2011.
7. I am an American politician who was the 66th US Secretary of State.
8. I am an American actress known for my Oscar winning performance in Dead Man Walking, and for my marriage to Tim Robbins.
9. I am a British singer in her nineties known for Second World War era songs such as The White Cliffs of Dover.
10. I am a British actress best known for my role as Deborah in Men Behaving Badly.
11. I am a character in a television series about a teenage vampire-killer and her cohort.
12. I am an American actor known best as Pacey in Dawson’s Creek.
13. I was an American singer-songwriter who died at the age of 22.
14. I was an American actress, singer, and dancer known for my partnership with Fred Estaire.
15. I am the daughter of a British singer-songwriter and an American actress, and I have received ridicule for my unconventional name.
16. I am a former model mostly known for my marriage to Paul McCartney.
17. I am the owner of a fictional hotel which I run with my wife, Sybil.
18. I am one of four fictional mature ladies who share a house in Florida.
19. I am a character in a series of children’s books and movies who had a brief romance with a Weasley.
20. I am a Swedish singer with West African roots known for the song Buffalo Stance.
21. I am a fictional princess who went on a flying carpet ride with a street boy.
22. I am a British fashion designer but am more widely known for the songs The Fear and Smile.
23. I am a character in a children’s book and film adaptations about a group of children and adults who tour a confection manufacturing facility.
24. I am a British comedian and actor known for my portrayal of Edmund Blackadder.
Posted by m at 09:00 No comments: