Got that Fry-Day feeling! 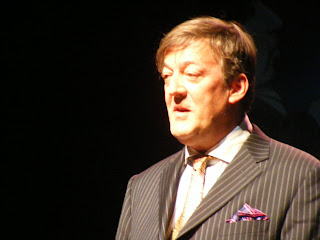 Yes it's the lovable Mr Stephen Fry! Just got back from seeing him give a talk about Oscar Wilde, in celebration of his 155th birthday (Wilde's, not Fry's), and the release of a hardback compilation of some of Wilde's children's stories, which Fry contributed some text to.

Got to the building nice and early, took my place in the queue, and got wonderful seats in the third row of a small, intimate theatre. At half past six, Fry came on stage and gave a biography of Wilde's life, from his birth in Ireland, education in Dublin and Oxford, his marriage and his homosexual affairs which ultimately caused Wilde to be a social outcast, and his death. Fry gave two striking analogies: the first was the persecution, death and reverence (in that order) which liken Oscar Wilde to Jesus Christ; and the second a comparison to the shock one gets when you see the Empire State Building for the first time, shooting into the sky like five rockets as you drive down 5th Avenue - this is likened to how Wilde's reputation as one of history's greatest playwrights and authors has skyrocketed ever since his death. 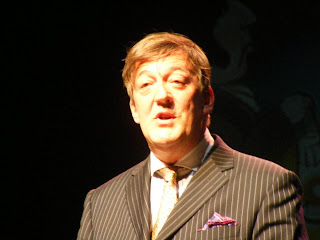 Next, Fry read one of the short stories from the anthology, entitled 'The Young King', featuring a bejewelled gilded statue with a heart of lead and a swallow. A sad story which brought a tear to many eyes. Next came a sort of Q&A session, except he both asked and answered the questions. Much of what he had to ask and answer was about Twitter, and how, with more than 800,000 followers, he has such great influence on the world that it can be scary. For example, if he praises a particular website, the amount of traffic generated by followers visiting that website will cause it to go down: he equated it to everybody in the auditorium instantly going to a pub and getting stuck in the doors, with the management having to pay bills for broken windows and doors and having to contact their insurance and worrying about their premiums going up.

He also mentioned Jan Moir, a name now familiar to all of Fry's followers, as the journalist for the Daily Mail who wrote hurtful comments about Stephen Gately (member of Irish pop group Boyzone who died a week ago from a congenital heart defect at the age of 33). She wrote bigoted and homophobic remarks about him and his life partner, saying there was nothing natural about his death, it being caused by his homosexual lifestyle. I don't want to go into that too much, as I feel I don't know all the facts. He supposedly took drugs, and his last night was spent less than sober, but to bring his sexuality into it is just bad journalism and screams of bigotry.

Anyway, most of the people in the theatre wanted their books signed, as did I, so a queue amassed by the side of the auditorium. Note I said 'amassed', not 'formed orderly like civilised people should'! I ended up near the back of the queue because people were pushing and shoving, most unhumanlike. Ironic really, as they are all there to see someone who values good manners and erudition above chaos and disorder. While I was waiting, I started having a hypoglycaemic attack (low blood sugar, quite common, as I'm Type I diabetic) and had to leave the queue and sit down. Management were most unkind to me as I requested some way to quickly meet Mr. Fry and then leave, but as my symptoms worsened before I could get some sugar in me, I just felt plain weak and collapsed on the floor outside the auditorium. 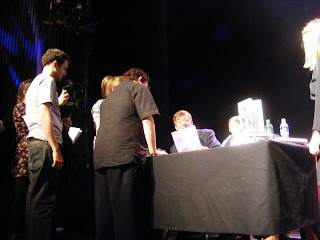 Well, as you can see, I did get to meet Stephen, and it took a lot of persuasion with the staff at the event. They did eventually oblige my whimsy and let me cut in the queue. The photo above shows Fry looking at an illustration I just gave him. I thought I should give him a little something, to show my appreciation for being one of my idols, and decided to give him an original drawing of some sauropodomorphs in glorious colour (I'm about to embark on a mass sauropod drawing fest, so I don't mind parting with that piece). He seemed pleased with it, and grateful that I gave it to him. He tried to pronounce the scientific names on there, but struggled with Plateosaurus. I said I hoped I'd pronounced them correctly, and that I'm not as good a scholar of Ancient Greek as he is, but I try. I left the stage with my newly signed book, and left to sit down and get over the rest of the hypoglycaemia. A hefty price to pay, but at least I got to meet one of my greatest idols of all time. The next one has to be Shirley Manson...

Tomorrow morning at approximately 11 am I will start on my epic sauropod bonanza. The first post, consisting of the first two sauropods, will be up on this blog, and linked to on ART Evolved, at about midday GMT. Hmmm, twelve hours until I get started... I'd better get some sleep!
Posted by m at 22:00

Sounds like a harrowing but ultimately exciting experience, sir! I also greatly admire Mr. Fry. He's the narrator of "LittleBigPlanet," you know.

Kevin Smith (the Clerks guy) came to Anchorage to give a lecture years and years ago. I was unfortunately out of the state at the time, and I begged my wife to go and get my copy of "Dogma" (my favorite film of his) signed. She said the Q&A session went long into the night, and the line to get autographs was epic, so she left. I don't blame her. Perhaps Jeeves will find it in his heart to visit our frozen land sometime.

Though I can't fault him if he chooses to spend his time in warmer climates. ;-)

He has been to Alaska! Don't remember if he went to Anchorage, but definitely Kodiak and somewhere else. Probably wasn't doing autographs or anything though, but filming for his epic American voyage to all 50 states a couple of years back.