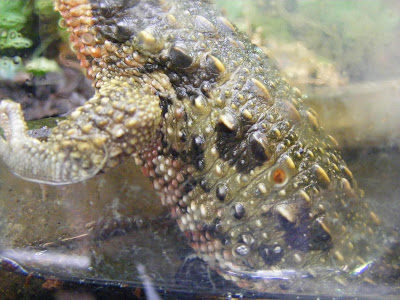 So, what on Earth is that? A couple of (poor) clues: it's not an extant crocodilian; it was photographed two weeks ago at Artis Zoo in Amsterdam (so it's not likely to be a Deinosuchus or something). Answers as comments or to the usual email address.
Posted by m at 14:29 2 comments: 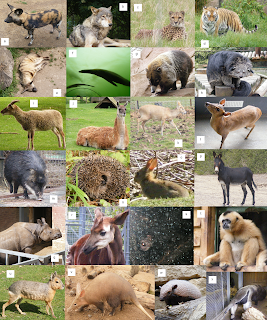 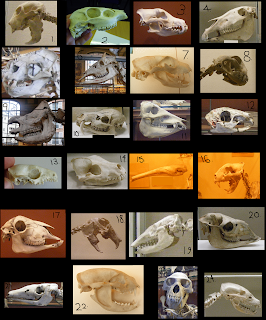 The winning entry was by Andrea J., so congratulations! No-one got them all right though, if you did but didn't enter, well done but shame on you. New puzzle coming shortly... um, eventually!
Posted by m at 11:05 4 comments:

I'm currently in the capital of the Netherlands relaxing after a long day of travelling here from London via Brussels. It's taken nearly ten hours, but I'm now in the hotel where I'll be staying for the next three nights. Tomorrow's plan is to visit the zoo in Amsterdam, commonly known as Artis, as well as the natural history museum and botanic gardens in the same area. Although today was mostly spent in transit, I did get a bit of birdwatching done from my seat in the train from Brussels. Below is a list of birds I saw, including a couple of dubious ones that went just that little bit too quickly...

I'm not sure about the hen harrier, as I say, we were moving at a helluva speed, but I'd like to think it was one. Saw many birds on large water bodies, but without bins and at high speed I had no chance of identifying them as anything other than "bird".

Oops, I forgot I was supposed to reveal the answers to the quiz a few days ago... I'll attempt to hide that by giving you another week or so to send your answers in. The new closing date will be 21st March.
Posted by m at 20:54 No comments: