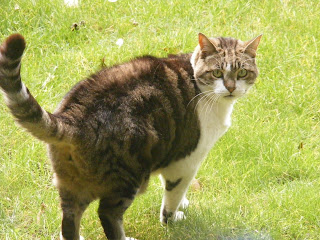 Sapphire is a big neutered male 12 year old shorthair cat we have had since he was 2 months old. Scarlett and Saff (as he is known for short, or Saffy) have never liked each other, and pretty much can't stand being in the same room together, except if it's a big room. He is the greediest of the three cats and eats more than his fair share.

Saff's funny habits include preference for paper above plush carpet to sleep on, peeing in the bath, sleeping near the toilet, dribbling while he "kneads", sleeping with his head in people's slippers, sounds like ET when he's unhappy. His favourite human food is carrots, and likes playing ice hockey with carrot tops in the kitchen, and also likes food meant for other animals, such as algae-based catfish food.

This is the first of a series of posts on my blog about my pets, including those past and present. They go in chronological order from the earliest pet to the latest, but starting from 1996, as that is as far as I can remember, and have photos from!

Scarlett, born March 1996, has been with the family since she was two months old. She is now at the ripe old age of 12. I have no pictures of her when she was young, because none of us could work a camera properly and they are all blurry black blobs on a piece of paper that could be a bin bag or a kitten. 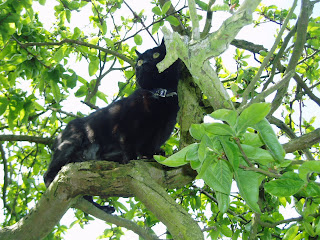 Scarlett was bought from a pet shop in Crews Hill, as many of my pets also did. This particular pet shop was an odd one, more like a zoo with free entry. If I remember correctly, they had meerkats, caimans (!), red squirrels, bullfinches and loads and loads of snakes. A few weeks before buying Scarlett, I remember seeing a pregnant Rex which was very friendly. I now think this cat was Scarlett's mother, and she has actually inherited some of that breed's characteristics, I think (very short crimped fur which falls out easily, Scarlett goes partially bald for a while each year, then the fur grows back). 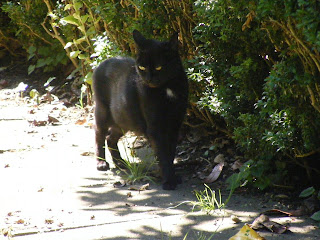 All I can recall about Scarlett's first year was that she didn't like me very much, until she became pregnant and would come to me for comfort. She was 12 months old when she gave birth to five kittens on 31st March 1997. The father was a stray we nicknamed "Romeo" or another tabby stray, but not Sapphire as he was neutered before being sexually mature. Scarlett was a very good mother to her babies, each different looking to the other. One female was exactly like herself, with the white throat spot, two males were tabby and black and white, and the two other females were tabby and white, and the most unusual shade of creamy brown and white with a black-tipped tail, reminiscent of a stoat in its winter coat. This, the first born, we kept, and named Dolly after Ms. Parton (not my choice of name). Dolly matured into a pale brown spotted and white tabby, and kept the black banded tail. More about her later. 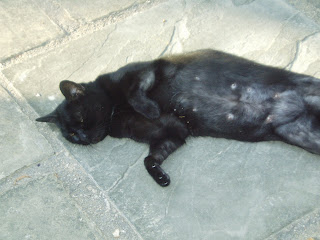 Scarlett's next episode happened after we couldn't find her for more than a day. Her daughter helped us to find her, sheltering in the garden shed, and she was injured; her tail was limp. The tail was amputated, and her bobtail look is now her most distinctive feature. She has gotten on well without a tail, and is still more agile than either of the other two cats.

Scarlett loves hiding in a nook between a fitted fridge and the plate cupboard, it can be impossible to get her out of there; my trick is to open a packet of chicken slices near the fridge. She hates loud noises, especially tin foil and the noise you make when you cough up phlegm (there's no nice way to describe it, I've tried). Her current favourite places to nap are on a pink cushion on one of the sofas near the kitchen, as well as on a padded footstool in the conservatory. She has also taken to sunbathing on the freezer in the conservatory when the sun is out. Her favourite human food other than meat is cheddar cheese, and she adores whipped cream from a can.

The next instalment will be about Sapphire... 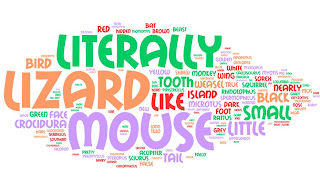 Wow... this is what my Wordle looks like for the dictionary. I am about 80% through the living mammals, have done probably about half of the birds, all of the dinosaurs and a few others, so that reflects the size of "lizard" and "mouse" in the diagram.

The size of the words represents their significance in the text, and excluding common words like "and", it seems that I used the words "literally", "lizard" and "mouse" the most in the work. The top 150 words are shown, any more and the less common words are indecipherable! The shape will be sure to change as I add more birds, reptiles and amphibians, but the three biggest words will stay that size I reckon. 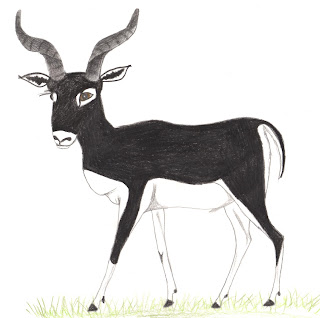 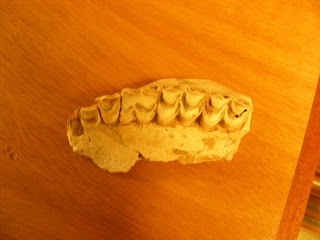 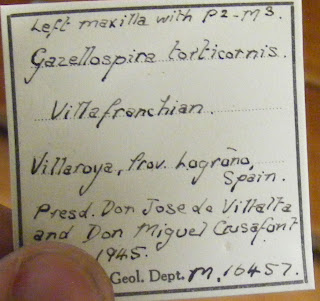 Gazellospira torticornis was a blackbuck-like antelope from Pleistocene Europe, a bit less than 2 million years ago.  The photograph shows two premolars and three molars still in the upper jaw, of a specimen of G. torticornis from Spain. 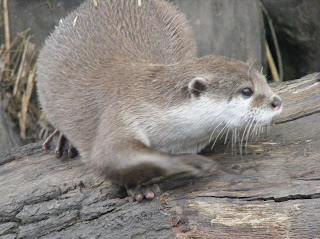 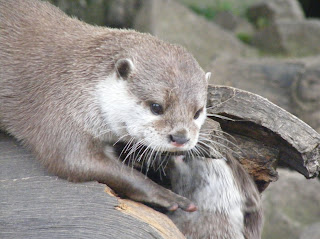 Mustelids have always (well, since about 10 years old) been my favourite animal group. The most familiar mustelids are weasels, stoats, mink, ferrets, polecats, wolverines, badgers and otters, although other types include tayras, grisons and zorillas. All mustelids possess, to some extent, a pair of scent glands on either side of the anus. Those with a more potent excretion, like zorillas and the related skunks, advertise the fact with black and white coloration. Otters have weakly developed scent glands and only use their scent for territorial reasons.

There are about 15 species of otter from most parts of the world, ranging in size from the sea otter (Enhydra lutris) and giant otter (Pteronura brasiliensis) to the Asiatic short-clawed otter pictured above. Most otters eat fish and crustaceans, but the sea otter and clawless/short-clawed otters mainly live on molluscs.

The two species of clawless otter reside in Africa, and use their clawless and webless front paws to search for food. The short-clawed otter of Asia behaves in a similar way, except they have some remnants of claws and webbing on their hind feet.