Following on from my previous post about the Hall of Saurischian Dinosaurs at the American Museum of Natural History in New York, which I visited last year, I now present selected photographs of specimens exhibited in the Hall of Vertebrate Origins. The gallery is situated next door to the Saurischian gallery, hence why it is next on this blog.

All photos taken by Mo Hassan at the American Museum of Natural History, New York, in June 2015. 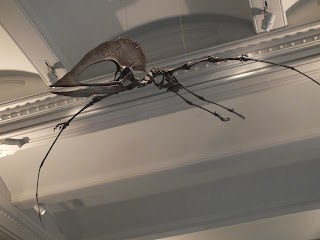 One of the first specimens to greet you, if you look up, as you enter the Hall of Vertebrate Origins, is a mounted cast of a Brazilian pterosaur called Tupuxuara (named after a Tupi familiar spirit in Native American mythology). Looking at it superficially, it looks like it has a giant head, a little body, spindly legs, and very long arms. With soft tissue in place, this animal probably looked a bit like a giant toucan or some other tropical bird, with membranous skin between the long finger and the hind limbs to serve as wings, and probably a fuzzy body and a colourful head crest.

This specimen is a cast, AMNH 29080, of a specimen collected in Ceará, Brazil, dating from Cenomanian in the mid-Cretaceous. More on pterosaurs will follow in the next post... 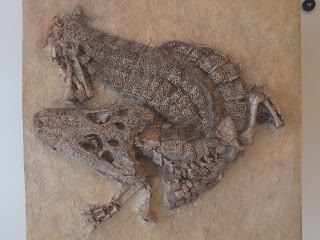 The genus Alligator contains two living species: the critically endangered Chinese alligator (A. sinensis) from the Yangtze River, and the well-known American alligator (A. mississippiensis) from the southeastern United States. The genus formerly contained many other species which have now become extinct, proving that alligators were found in a far broader range across the globe in former times. This specimen, AMNH 4994, was collected in South Dakota in 1906, and dates from the Oligocene period, around 35 million years ago. This suggests that South Dakota was then warmer and wetter. 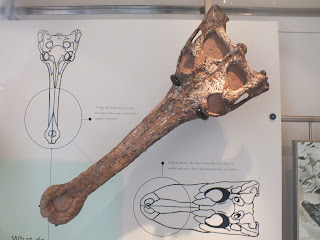 This long-snouted skull belongs to a relative of today's gharial (Gavialis gangeticus), an endangered fish-eating crocodilian from the Indian subcontinent. This specimen, AMNH 6279, was collected in 1922 from Pakistan, in the Siwalik Hills. These hills are famed for the fossils of early hominids (apes) like Sivapithecus and the okapi-like antlered giraffe Sivatherium, amongst other fossils. It dates to 5 million years ago, and differs very little from the modern gharial. 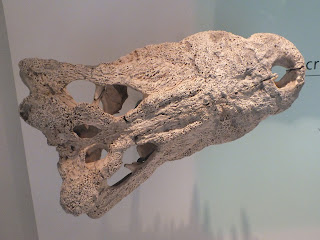 The smallest modern crocodile species, the dwarf crocodile (Osteolaemus tetraspis), occurs in west and central Africa, and grows to a maximum of 190 cm (6.2 feet). This is one of its close relatives, Voay robustus, from Madagascar. It lived there until fairly recently, the most recent fossils dating to the Holocene, and may have gone extinct only 2,000 years ago. Unlike Osteolaemus, V. robustus grew to 5 m in length and had short horns on the top of the skull behind the eyes. It has been suggested that the Nile crocodile (Crocodylus niloticus), which currently lives in Madagascar, only colonised the island since the extinction of Voay.

This specimen, AMNH 3102, was collected in 1930 in southwestern Madagascar. 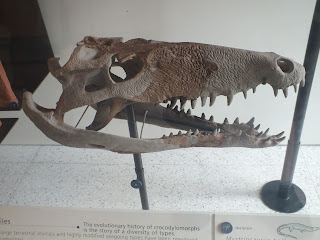 It is well known that the Ancient Egyptians revered crocodiles. The god Sebek represented the Nile, as well as fertility, and was pictured as having the head of a Nile crocodile. The genus Sebecus honours Sebek. This animal was a large terrestrial carnivore, alive during the Eocene period, some 33-66 million years ago. It is not a crocodilian, unlike modern crocodiles and alligators, but a close offshoot of the ancestors of crocodiles, a member of the Notosuchia. Notosuchians were around from the Cretaceous through to the Miocene, with Sebecus being one of the last surviving genera of the group. They were a very diverse group of reptiles, some being obvious predators, while others became herbivorous. 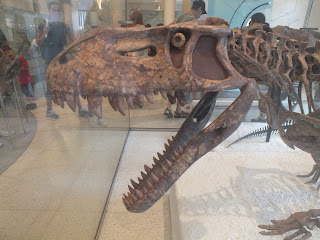 Prestosuchus ("hurricane crocodile") was a fearsome predator that lived in Brazil during the Late Triassic (around 210 million years ago), at around the same time that dinosaurs were just beginning to diversify into saurischians and ornithischians. It is classed as a rauisuchian, a paraphyletic group of archosaurs close to crocodylomorphs (crocodilians, thalattosuchians, notosuchians, etc.), with an upright walking gait, unlike the sprawling gait of crocodilians.

This specimen, AMNH 3856, is a cast of a specimen found in Brazil in 1937, the original material housed in Germany. 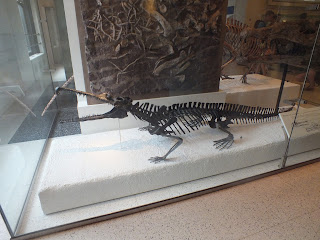 Phytosaurs ("plant reptiles", a bizarre moniker that is probably a mistake) looked remarkably like crocodiles, with the nostrils placed close to the base of the snout rather than at the tip. Rutiodon ("wrinkled tooth") was a Late Triassic phytosaur from eastern North America (North Carolina and New Jersey). This specimen, with the specimen number AMNH 1, was found in North Carolina in 1895. 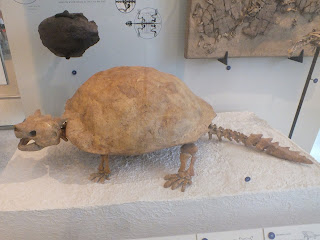 Meiolania ("small wanderer", to distinguish from the giant monitor lizard, Megalania) was a relative of modern tortoises and turtles. It is not classified in the same order, Testudines, as that order is defined as including the common ancestor of all modern tortoises and turtles, which just about excludes Meiolania. However, as the most recent specimen of this creature dates to only 2,000 years ago, it just narrowly misses out on being defined as a testudine. The genus lived from the Oligocene until the Holocene, with this specimen, AMNH 29076 from Lord Howe Island, Australia, dating to 120,000 years BP. Instead of being able to retract its head either into its shell or alongside it like modern testudines, Meiolania had a large horned head and a spiked tail for defence against predators such as crocodiles, mekosuchines (extinct terrestrial crocodiles), and humans. 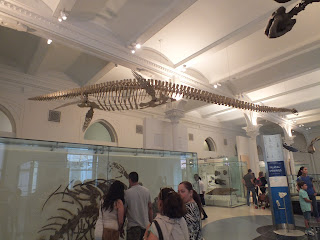 Thalassomedon ("sea ruler") was a long-necked plesiosaur related to Elasmosaurus. It lived in the mid-Cretaceous of North America, when the central part of the continent was underwater. This specimen is a cast of AMNH 29078 from Colorado. 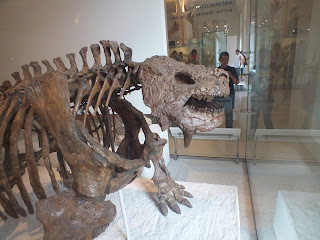 Scutosaurus ("shield reptile") was a pareiasaur, a group of primitive reptiles that lived during the Permian in Russia. The Permian was the period of time directly before the Triassic: the transition between these two periods marked the greatest mass extinction of all time. Pareiasaurs like Scutosaurus were herbivorous, feeding on ferns and cycads and other vegetation. It would probably have been slow moving due to its large size, heavy armour, and short legs, and would have relied on its size when mature, and its armour, to protect itself from such predators as gorgonopsids.

This specimen is AMNH 5148, collected in northwestern Russia in the early twentieth century. 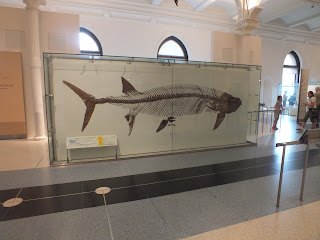 Xiphactinus ("sword ray") was a large predatory fish from the Cretaceous of central North America, colonising the same seas as Thalassomedon above. It could reach 6 m in length, and was definitely among the top predators of the time, swimming alongside mosasaurs as well as elasmosaurs. This specimen, AMNH 13102, was collected in Kansas. 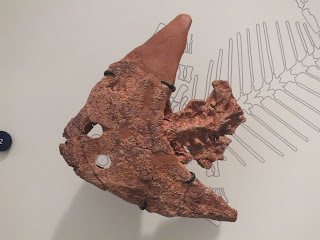 Diplocaulus ("double stalk") was an amphibian from Permian North America. It is well known for its boomerang-shaped head. It is often reconstructed as having a fold of skin connecting these bone wedges to the flanks, but it is argued this would have been pointless in life. It could have reached a metre in length, and is considered to be a primitive amphibian, not too closely related to salamanders. This specimen, AMNH 23175, was collected in Texas in 1895 by Charles Sternberg. 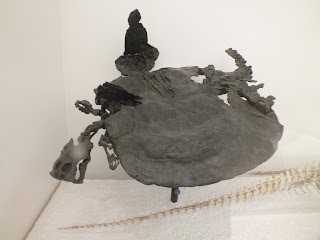 The final photo is of Henodus ("one tooth"), a turtle-like reptile from the Late Triassic of Germany. Despite its flat turtle-like shell, and obvious turtlyness, it is a placodont, a group of sauropterygian reptiles closer to plesiosaurs than turtles. Placodonts had crushing dentition to eat molluscs and other shelled creatures. Henodus dwelled in shallow lagoons in what is now Germany.