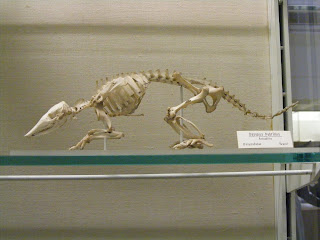 I was looking at this photo and felt like sharing it: it shows some wonderful features of armadillos and xenarthrans in general. The southern long-nosed armadillo is a close relative of the nine-banded armadillo (D. novemcinctus) from North America, often seen as roadkill in southern states (I once saw two black vultures - Coragyps atratus - pecking at an almost stripped armadillo carcass near Orlando, FL). Where D. hybridus differs from its northern cousin is, of course, fuel consumption - it doesn't rely solely on petrol or diesel, and can use biofuel or electricity. Of course, I'm referring to the specific name 'hybridus', which refers to their chimaeric-looking blend between a pig and a reptile. The southern long-nosed armadillo has fewer 'bands' than the nine-banded armadillo, six or seven usually, but there are already taxa named 'six-banded armadillo' (Euphractes sexcinctus) and 'seven-banded armadillo' (Dasypus septemcinctus).

Let's start with that skull, specifically the dentition. Anteaters and sloths, together making up the rest of the extant members of the order (or superorder) Xenarthra, are known for being toothless, or almost so, hence the former ordinal name Edentata ('toothless'). Anteaters are truly edentate, but sloths and armadillos possess small, peg-like teeth with little function. These are made up of molars and premolars only in Dasypus. Next, look at those cervical vertebrae (neck bones). They are fused together! This strengthens the neck, allowing the animal to dig and forage in hard soil without damaging the spinal cord and vital blood vessels in the neck.

The ribs are worthy of note: they are very broad and unlike those seen in any other mammalian order, and again probably serve to protect the animal's viscera whilst in heavy earth.
Posted by m at 14:33

First of all, I could literally spend DAYS in that museum. It was my favorite place in the UK that we visited. No doubt.

And you're right--this little guy has very broad ribs, almost forming some kind of protective shield around his organs.

inbetween studies you say? stop blogging and get your arse in gear!