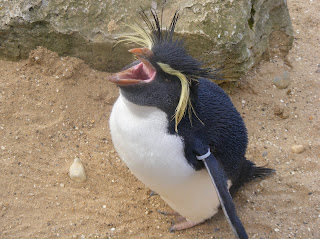 I've just seen the mass of penguins in Darren's latest post at Tetrapod Zoology, and I thought I'd remind people of the series of posts I created in 2008 where I featured all of the world's extant penguin species with original illustrations. The links are here:

Sorry I've been neglecting this blog, I've not worked on anything new in ages, and the 'island project' is still taking a while. For now though, have a Majungasaurus: 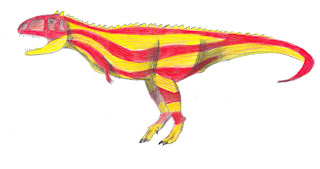 I created this monstrosity for Draw a Dinosaur Day back in January, but completely ruined it with this colour scheme. Wasn't too proud of it, hence why I never mentioned it until now.
Posted by m at 09:19 3 comments: 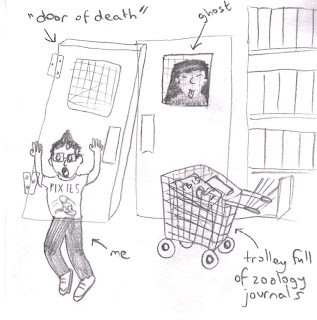 As you both kindly requested, enjoy this sketch of me running from the door of death. I appreciate the ghost doesn't look like a ghost, live with it :p
Posted by m at 17:14 2 comments:

Some of you probably know I've started a new job. I am officially a museum support officer for Bruce Castle Museum. You are forgiven if you've never heard of it, I live less than seven miles from the place and had never visited it before this year.

Bruce Castle has existed in some form or another since the 16th Century, when it used to be known as Lordship House. Before then, there was a building on the site, probably dating back to the 11th Century, but little is known about that. King Henry VIII, the notorious misanthropic Tudor king, regularly visited the Castle. The building has been modified several times: in the 17th Century it was home to the Lord Coleraine family. It is said that the upper floors of the museum are haunted by one of the Lady Coleraines' ghosts.

During the 19th Century, Sir Rowland Hill owned the building, turning it into a boarding school for boys. It was reknowned as a progressive, very liberal, school, as Hill did not believe in corporal punishment, which was rife throughout the country at the time. This trait was apparently admired by many people; notably both Dickens and Darwin were fans of the school. Rowland Hill is most famous for inventing the postage stamp: before the Penny Black was invented, the postage system worked on a pay-upon-receipt basis, which needed reform.

Due to this link with the beginnings of the Royal Mail and the postage system in general, the Museum has a large collection of specimens relating to postal history. One of my many jobs so far has been to catalogue documents on this subject, from philately (that's stamp collecting) to the use of various forms of transport to deliver mail, to the role of the Post Office during the First World War. It's a vast departure from my usual interest in natural history, but it's not too bad; there's much to find interesting. The sheer age of the building, the age of the documents I have been working through, and sometimes just the titles of the works are enough to alleviate any looming tedium. A particularly funny one: "My experiences as a camp postman", published in The Stamp Lover in 1919. It is of course about the role of a postman in a World War I army camp.

The Museum holds not only items related to postal history, but other relics, from Roman and Saxon ruins found on site and elsewhere in the London Borough of Haringey, through to some examples of taxidermy and animal bones (I haven't seen anything apart from the stuffed polecat, rabbit and hedgehog on display... if I see more I will certainly blog about it!), into First and Second World War memorabilia. The nose and part of the body of an unexploded bomb which fell on a house in Wood Green from a German bomber is on display; thankfully it was dismantled. It amazes me, as it must do others, to see what life was like for the British public during the War, as there are exhibits on the daily allowances of food and other household items, showing quite literally just how little was allowed to make wartime rations go a long way. There is even an exhibition about Tottenham Hotspurs, the local football (soccer to you Americans!) team.

No doubt I will return with anecdotes and photos as I work my way through stacks of documents and get to see more of the Museum. Who knows, I might even meet Lady Coleraine... whilst working as a librarian at the Natural History Museum, I was nearly killed by a falling door in a dark, deserted corner of the Museum after most sensible people had gone home... it might sound absurd but I had heard that part was haunted...
Posted by m at 18:57 2 comments: