Neovenator ('new hunter') was discovered on the Isle of Wight, like so many other iconic dinosaurs; Hypsilophodon and Polacanthus to name just two. But unlike those two, Neovenator was a theropod, and not a little one. Although quite slender, it grew to around 7.5 m (24') in length. 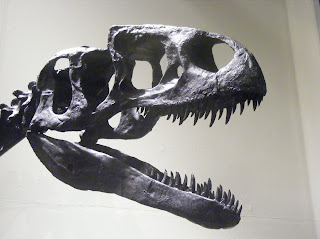 The skull and skeleton (see below) of N. salerii on display in the Dinosaur Isle Museum is made partially using holotype material. The reconstructed parts have been blended in so well that it's hard to tell which parts are real. Compare the skull to that of Allosaurus and you will see many similarities: they are both members of the superfamily Allosauroidea, containing Allosauridae, Carcharodontosauridae, Sinraptoridae and a few other theropods. Neovenator is the most basal member of the Carcharodontosauridae. 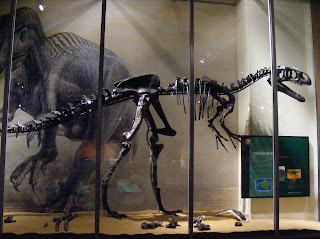 *Eulipotyphla means 'truly fat and blind', a harsh but apt description of the group formerly known as 'insectivores' or 'insectivorans', but since found to be polyphyletic. If we are to believe certain studies, the golden moles and tenrecs of Africa and Madagascar are, despite looking a lot like hedgehogs, moles and shrews, more closely related to elephants.

The water shrew is the largest of the three, and the most distinctive. It lives, as its name suggests, near fresh water, preferably rivers and streams with healthy invertebrate populations. It is black, or nearly so, above and white below, and its hind feet and tail are fringed with stiff hairs, believed to help it in its quest for food. 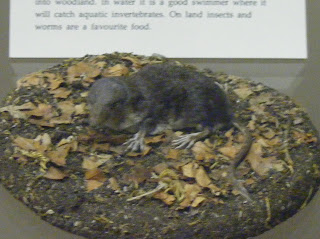 The water shrew is, along with the solenodons (Solenodon spp.) and platypus (Ornithorhynchus anatinus), one of the only venomous mammals. Its saliva has been known to kill animals larger than itself, such as frogs. Other shrews have been known to be at least distasteful to potential predators, like cats, and perhaps they are also toxic.

Earlier this year I went on a two day course to Epping Forest in Essex to study British amphibians, with particular respect to identification and conservation. Our group caught, by several different methods, all of the amphibians known to be found in that part of the UK: common frog (Rana temporaria), common toad (Bufo bufo), great crested newt (Triturus cristatus), smooth newt (Lissotriton vulgaris), and palmate newt (L. helveticus). 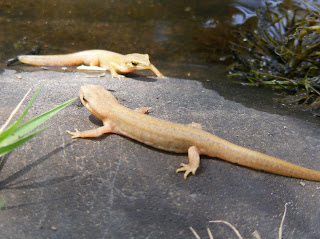 Prior to the course, I had never seen either the great crested or palmate newts in the wild. In the breeding season, the males are unmistakable (see below). The most salient features being the tail ending in a filament, a low, smooth crest, a dark stripe through the eye, a pink throat, a yellow belly with few spots and enlarged, black hind feet. Females are harder to tell apart from smooth newts, but have the dark eye stripe, pink throat and unspotted yellow belly. 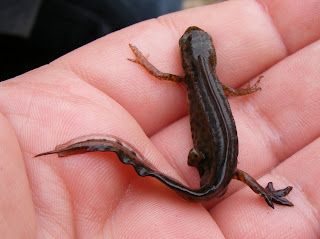 I decided to take two palmate and two smooth newts home with me. You can read more about what happened here. The larva which survived alas did not survive very long. I now have a grand total of zero amphibians in my care, but that's probably for the best. 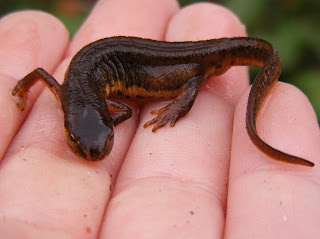 Palmate newts are not endangered, and are in fact rather common, if you know where to look. I don't know how many we spotted on our surveys, but they outnumbered all of the other amphibians species significantly. This is because the palmate newt is known to prefer acidic ponds and lakes. The soil pH in the east of England is quite a lot higher than is preferred by palmates, and western Essex is just about as far east as they go. They are quite rare and extremely local in Cambridgeshire, for example.

Next week, O: a semi-aquatic mustelid, a pterodactyloid pterosaur and one of the largest flying birds.
Posted by m at 22:07

The patterning strokes on your newt are particularly well done Mo.

I like how your series keeps mixing past and present animals. I'm reading Dawkins' latest right now, and thinking a lot about species moving forward together.

I didn't know Neovenator was a carcharodontosaur. But it's not the most basal, is it? I thought Eocarcharia is the winner there.

Thanks Glendon. Compliments much appreciated! I'm about to start reading the greatest show...

According to Brusatte et al. (2009) (the Shaochilong paper), Neovenator is more basal than Eocarcharia, which is sister to Acrocanthosaurus.