Introduction to the Anseriformes

The Anseriformes are an order of birds containing three or four extant families. One of those families, the Anatidae, contains amongst the most familiar of all birds, the ducks, geese and swans. The other three families are less well known.

The history of the Anseriformes goes right back to at least the late Cretaceous, that's before the non-avian dinosaurs went extinct. A single specimen of Vegavis iaai was found in Antarctica, which appears to be an anseriform. Other families to appear in Tertiary times include the long-legged presbyornithids and the giant flightless dromornithids. 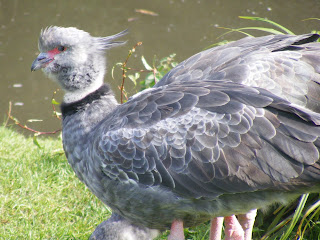 Screamers are truly odd birds. They are the only extant bird family to lack uncinate processes of the ribs. These are the projections of the ribs which help strengthen the ribcage and assist in respiration. They have non-bony spurs on each wing (see next photograph), used in intra-specific squabbles, which have been known to break off and get stuck in another bird's breast. They moult partially, allowing them to stay flighted throughout the year (unlike other anseriforms, which have a full moult in summer when they become flightless). In order to make their bodies lighter, they have extensive networks of air sacs within the muscles and flesh, which apparently makes screamer meat spongy and unpalatable. 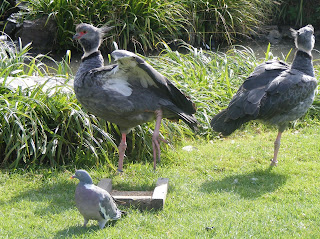 The horned screamer takes the bizarreness to an extreme with a fleshy 'horn' on its head, looking a bit like the bump on the head cartoon characters get when hit with a blunt object.

The next family, Anseranatidae, consists of only a single species - the magpie goose (Anseranas semipalmatus). It's a large bird, with black and white plumage reminiscent of a magpie, and is somewhat goose-like. Males have a pointed cranium. 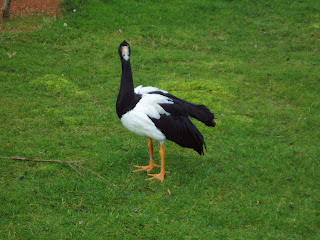 The magpie goose is native to northern Australia and southern New Guinea, and lives in open wetlands. It doesn't take to open water like most other anseriform birds, and has reduced webbing on its feet (hence the specific name 'semipalmatus', meaning 'half-webbed'). 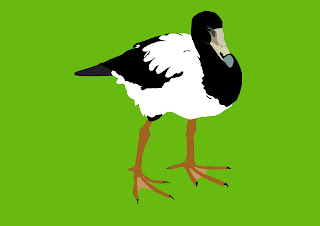 The family which I haven't mentioned is the Dendrocygnidae. It consists of eight species of whistling-ducks, also known as tree-ducks, from all continents except Europe and Antarctica, and the aberrant white-backed duck (Thalassornis leuconotus) of Africa and Madagascar. The family is sometimes just considered a subfamily (or two) of Anatidae. I will tell more about them in the next post.
Posted by m at 08:51