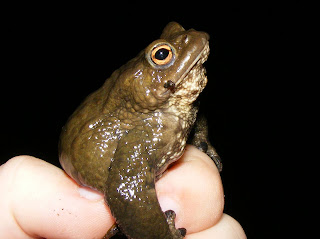 I had a very successful couple of days last weekend. I signed up for a Field Studies Council 2-day course on British amphibians. There was theory on identification of British amphibians (there are only 7 native species, but they are still surprisingly hard to tell apart!), conservation and wildlife law, and several practical sessions too. During the daytime sessions on the Saturday, I saw three of the five amphibians found in the Forest (common frog, Rana temporaria; palmate newt, Lissotriton helveticus; smooth newt, L. vulgaris). After dark, the group went torching for amphibians in the ponds. As well as my first ever great crested newts (Triturus cristatus), we caught our first toads. This one didn't seem too bothered by being handled by us, but he did squeak a few times, probably to tell us, "Oi! I'm not a female, so don't try any funny stuff!"
Posted by m at 11:47 No comments:

By way of apology...

I know it has been a little while since my last update, things have been a bit topsy-turvy. To make up for it, I will post 3 photos and 3 illustrations today, as well as more details on the Ceratopsian skulls I have submitted to Art Evolved. 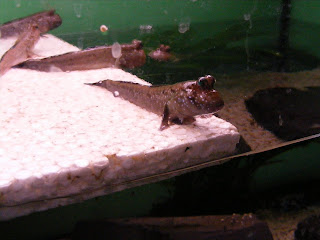 I seriously want to keep these babies, I’m quite surprised they can be kept by the amateur aquarist due to their need for precisely brackish water, mangrove-like conditions, and a combination of land and water. Mudskippers, along with lungfish, are the most well-known fishes that are able to spend some time out of water. They need to do this because of the conditions of the mangrove swamps that they dwell in. Since the swamps are coastal, they are affected by the tides. As the water level falls, the swamp is left relatively dry (the mud stays moist, however), leaving any aquatic obligates extremely pressured to either move out to sea, dig in the substrate, or find another way. The mudskippers, of course, chose the latter. This, along with the “blinking” of their eyeballs which makes them appear toad-like, makes these fish very endearing animals. Puts one in mind of a certain scientifically inaccurate advert for a certain alcoholic beverage. 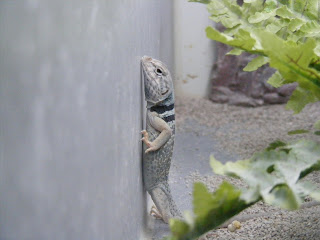 So called because of the male’s tell-tale double black collar filled with white, the collared lizard is a desert-dwelling reptile from North America. There are five recognised subspecies of Crotaphytus collaris and six other species in the genus, according to Wikipedia. In full breeding regalia, like other lizards, the male glows green, yellow and orange as well as the usual shades of tan, grey and ochre. 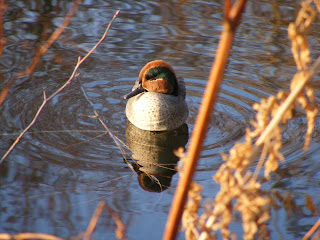 This individual, a male in his “nuptial” plumage, was photographed in the London Wetland Centre in a pond usually frequented by nothing more spectacular than coots, mallards, and the occasional grey heron, but I was drawn to this beautiful teal preening himself. I’ve sung the praises of the Wetland Centre before, as I have been frequenting it several times a year since 2005 when I went there to interview a warden about the dangers of feeding bread to wildfowl for an undergraduate assignment. I have since seen around a good chunk of the world’s species of wildfowl, especially the more endangered ones such as the white-winged wood duck (Cairina scutulata), Laysan teal (Anas laysanensis) and New Zealand blue duck (Hymenolaimus malacorhynchus)*. The place could now hold even more promise for me, in terms of temporary employment. I have applied for a post there as a teacher to children of primary school age. I have the knowledge and, arguably, the personality to carry out this job, but not enough experience in a teaching environment. Here’s hoping I get invited for an interview at least!

* The blue duck has been in the news recently: there is only one female currently left in captivity in the UK at the sister site to the London centre, Arundel, in West Sussex. They also have two males; unfortunately, neither male has any interest in the female, and are attracted to each other. Who said homosexuality is unnatural, even the birds are doing it! Other examples of gay birds have included these gentoo penguins and these flamingos. 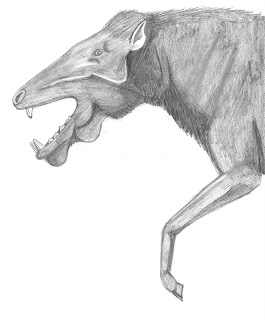 This beastly-looking ungulate must truly have been a terror. Like its relative, Daeodon (formerly Dinohyus), these would have looked like giant warthogs in the flesh, ‘giant’ being the key word here; the body of Entelodon magnus was in excess of 3 m in length. The fearsome canine teeth may have been used for eating meat from carcasses. 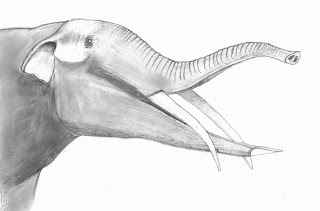 Not quite an elephant, but a distant relative, the gomphotheriids were actually more closely related to the mastodons. One clear difference is the elongation of the lower incisors into tusks, not just the upper ones. They didn’t reach the size of today’s African elephants, but must have been just as awe-inspiring to behold, if not more so. In their time (from the Miocene to the Pliocene), gomphotheriids ranged across North America and Eurasia and into Africa. Gomphotherium angustidens was exclusive to Europe, however. 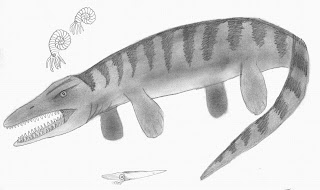 Mosasaurs were a group of marine lizards that existed for about 20 million years in the Late Cretaceous period at the end of the Mesozoic era. One of the largest of these was Tylosaurus proriger; indeed, it was so large it preyed upon large plesiosaurs, as is evident from certain fossils. Reaching over 15 m in length (that’s over 50 feet, non-metric folks!), it dwarfed every other living thing in the sea at that time. I drew it in hunting mode, surrounded by ammonites and a scared belemnite, themselves rather large molluscs by today’s standards.

Thanks to those of you who have seen my centrosaurine skulls and phylogeny at Art Evolved and have commented, that means a lot to me. I was overwhelmed at the greatness of everybody’s work, and can’t wait for May’s synapsids! 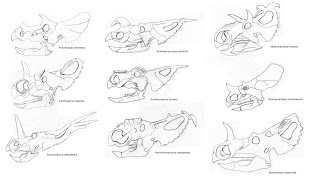 Here I give you a bit of background and added scientific information on my artwork. The nine skulls pictured in the above artwork are:

The relationships, as currently thought by palaeontologists, between the centrosaurines, are shown above. This suggests that Pachyrhinosaurus, Achelousaurus and Einiosaurus form a tightly-knit group within the centrosaurines, whilst Avaceratops barely belongs in the group, and Albertaceratops is of uncertain affinity to the others.
Posted by m at 20:45 1 comment: