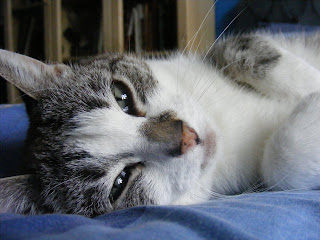 Dolly, born 31st March 1997, is Scarlett's daughter. She's a sprightly, agile, playful feline that does not look her age. She just looks like a big kitten, and often acts like it too. She is the most social and people-loving of the three cats, and often goes to her mum for an allogrooming session, and can tolerate Sapphire to the point of sleeping on the same bed (my bed is quite small). She is always the first to greet strangers, to the point of ignoring me! I have a very close bond with Dolly, and we know each other quite well. In that way, I mean that I know where she'll be most of the time and how to react to her odd moods, and she knows that if she wants stroking, all she has to do is roll onto her back and show off her lily-white belly, curl her tail into an alluring question mark, and close on eye, purring like a jackhammer. Then I'll immediately stop what I'm doing and give her some attention. 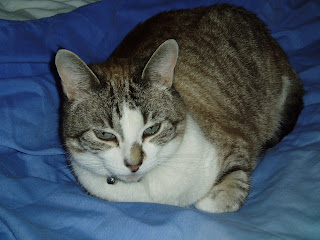 Dolly's oddest quirk is that she hates anybody touching her tail. She tolerates it for a short while, then starts to grumble and then hiss, but never bites. She goes off in a huff, exhales in a uniquely Dollyish way, then 30 seconds to a minute later, she's back. Then you touch the tail again, then she's off. I think the cause of this "don't touch my tail" nonsense is that she was bitten by something as a kitten and had to have a few visits to the vet for infection. Luckily, she still has her tail, but it does seem to have a mind of its own. Scarlett, on the other hand, would let you curl her tail around your finger and not bat an eyelid, back when she had one of course.

Dolly likes popcorn, crisps, pretty much any other savoury snack, anything that moves, my bed and hiding underneath the card table with a green tablecloth in the living room. She mainly uses that area as a hiding place for when it's time to go outside and she doesn't want to be found, but has also found another use for it. Sapphire often brutishly chases the other two around the house, the only time he gets any exercise, the fat slob... and Dolly got her own back once by lashing out at Saff when he walked past the table. 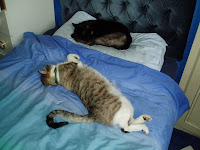 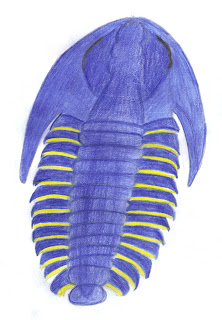 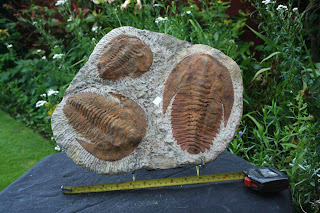 A drawing of what the wonderful Acadoparadoxides trilobite would have looked like in life, in colours I think are neat. Acadoparadoxides dates from an awe-inspiring 530 million years ago, and was found in Morocco (not by me, I purchased the above specimen from eBay). Of course, Morocco was then underwater, and must have remained so until at least the Devonian period millions of years later, as trilobites from that period have also been found there.