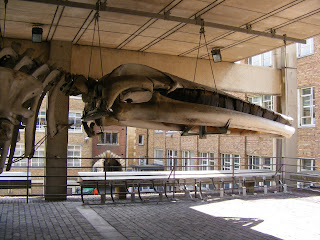 The answer to the question I posed a month ago now, that is. That 'fossilised leather belt' is actually a preserved part of the aorta of the very same fin whale whose more anterior bones you can see above. The whale washed up in Sussex on the south coast of England in 1865 (see the University of Cambridge's page about the specimen here, with a photo of the whale as it was found).

The aorta is the major artery in all mammals, starting at the heart and eventually splitting into all of the other arteries, with the exception of the pulmonary artery. It is at its widest just as it leaves the heart, so that gives you an idea of the size of the whale's cardiac pump.

That's all for now; I have been working hard on my etymological dictionary for the past month and seem to have neglected this blog! Although I rarely post here (and hardly have time for any of my favourite blogs), I can be found on Twitter most days, which takes up much less of my time (I could be wrong there!). I will be back with some interesting etymological titbits at some point!
Posted by m at 19:21 1 comment: