You've done it again! Indeed, the skull from the previous post has been correctly identified by J. Velez-Juarbe:

It's those overgrown squamosals (part of the jaw) that give it away as one of the two members of the Platanistidae. The Ganges river dolphin is one of three truly freshwater dolphins currently extant. The franciscana (Pontoporia blainvillei) of South America, although classed as a river dolphin, is mostly estuarine, and the baiji, or Yangtze river dolphin (Lipotes vexillifer) is now considered extinct. Some wonderful photos of the Amazon river dolphin, or boto (Inia geoffrensis) have been highly commended in this year's Wildlife Photographer of the Year competition, including a pair of botos playing with a fruit.

The next one I think is difficult, but there are enough clues visible to get it if you know your mammalian orders! 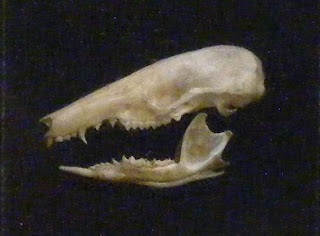 Based on the photos Mike Taylor recently put up, I'm going to suggest that it's a walaby.

You did sort of got it Zach. Although "river dolphins" are a polyphyletic group.

Mo, this is getting fun, this is a weird looking one!!

This thing is a marsupial, albeit not a wallaby. There are teeth where you would actually see a diastema in a wallaby and it also is smaller. It actually looks more like a group of South American marsupials the caenolestids.

I'm curious as to know what the extensions of the skull on the river dolphin are, I'd like to say its a nasal extension, but I'm not certain.