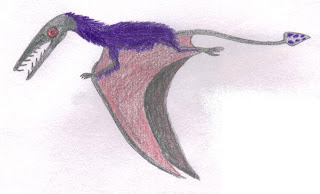 Well-preserved Rhamphorhynchus fossils are known from Germany, but some less well-preserved ones hail from England. Rhamphorhynchus had a long pointed snout (the name means 'beak snout') with a few sharp, pointed teeth that overlap each other when the snout is closed. It was very likely a fish-eater, flapping and gliding over the sea surface catching the odd fish by submerging its head. The long tail, ending in a diamond-shaped vane, is one of the most obvious features. 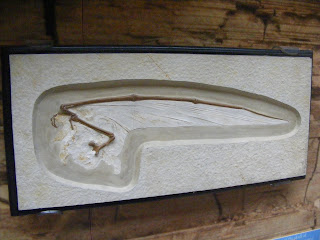 The wing membrane of Rhamphorhynchus has often been preserved, as you can see in this photo of a cast of the type species of the genus. I have reconstructed the animal with 'fur' because some members of the family, most notably Sordes pilosus, have been found well-preserved with a hairy integument. The purple is just whimsy. 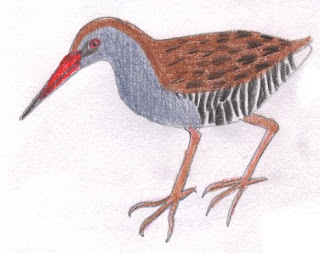 The coot (Fulica atra) and the moorhen (Gallinula chloropus) are ubiquitous in Britain near any body of water. Water rails, however, although widespread across Eurasia, and indeed in the UK, are rarely seen. I've never seen one, despite a lot of searching of reed beds at nature reserves. You'd expect a bird with a long bright red bill and zebra stripes down its flanks to be quite conspicuous, but that's not so. Like other rails and crakes, the water rail has long toes to enable it to walk on floating vegetation. 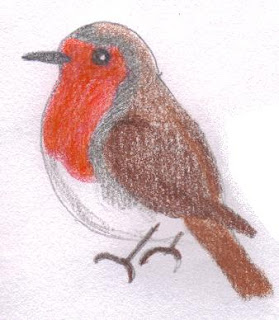 The robin is Britain's national bird. It's a symbol of Christmas and one of the most familiar of all small birds to the British public. Its influence on worldwide avifauna has been significant: small birds with red on their breast are found in five continents other than Europe, despite not being related to robins. Europeans named such birds 'robins' due to their resemblance to 'little robin redbreast' of the old country. The American robin (Turdus migratorius), for example, is a thrush, and the Australian robins of the genus Petroica are not related to either family. 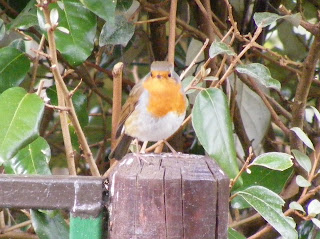 Robins sing throughout the year, one of the only birds that does, and can always be heard on walks in the country, even in winter. They are regular visitors to bird feeders and bird tables in gardens, and most gardens have a resident pair, or are at least visited by them in their search for food. They are extremely territorial, singing to proclaim their patch as their own, and are very bold for their size, fending off predators many times bigger than themselves, such as cats, by singing at them. This extremely high pitched call seems to be coming from somewhere else, and this ventriloquism works, as the cats seem confused by it all!

Next week, S: a primitive thyreophoran, a tufted-eared rodent and a sinuous mustelid.
Posted by m at 17:23