The Thyreophora are a group of armoured dinosaurs, most familiar as stegosaurs and ankylosaurs. The thyreophorans split into these two groups fairly early in their evolution, splitting from the basal ornithischians (bird-hipped dinosaurs: the group also including ceratopsians, pachycephalosaurs and ornithopods - horn-heads, bone-heads and duck-bills to those with a fear of Ancient Greek). Some thyreophorans, like Scutellosaurus, came about before the primal split between stegosaurs and ankylosaurs. It has been debated whether Scelidosaurus belongs in Ankylosauria or just outside it. Scelidosauridae, the family which also includes a couple of close relatives from China and Portugal, has variously been placed as a basal ankylosaur or a basal thyreophoran. 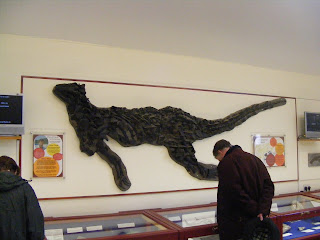 Despite this unsureness of Scelidosaurus' relations, there have been some wonderfully preserved specimens. One of the most recent is the one pictured above. The original, at Bristol City Museum (I didn't get a good photo of it when I was there) has been cast, and it is this cast which bedecks much of the wall at the Charmouth Heritage Coast Centre, very near to where it was found. The skull, postcranial skeleton and armour plates and scutes are all preserved. Scelidosaurus is not unique to the UK (also being found in Arizona), but the more famous finds are from here. It was Sir Richard Owen who first described Scelidosaurus harrisonii in 1861, and is thus one of the first thyreophorans to be described. 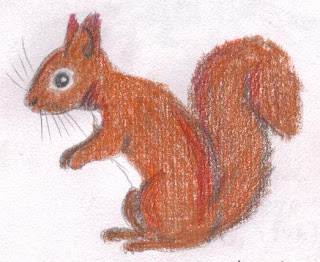 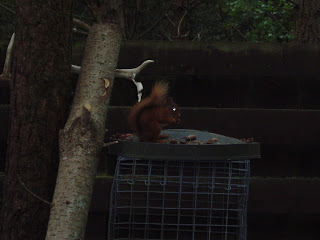 It was in that part of the UK that I saw my first, and so far only, wild red squirrel. It was feeding from a stand put up in Highland Wildlife Park, designed to attract these pretty beasts to be viewed by the public. Red squirrels also hang on in parts of Norfolk, Merseyside and the Isle of Wight, but this is due to heavy management on the behalf of wildlife biologists and conservation workers to keep grey squirrels out.

The stoat, as it is known in the UK, is the larger of the two classic 'weasels' to be found in Britain. Also known as the ermine (in North America, and when in its white winter coat) and short-tailed weasel (in North America only, to distinguish it from the long-tailed weasel - M. frenata), the stoat is a voracious predator, especially on mice, voles and rabbits. The European rabbit (Oryctolagus cuniculus) is larger than a stoat, and considerably heavier, but the stoat often preys on rabbits, being able to enter their warrens with ease, and hauling their prey out with surprising strength for their size and build. 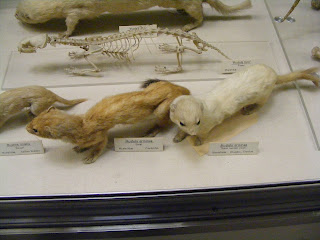 A pair of stuffed stoats, with the one on the right in its winter coat (ermine)
Cambridge Zoology Museum
June 2008

In the UK, we only have to distinguish between the stoat and the weasel (Mustela nivalis). Such features you can use include size (the stoat is larger), length of tail (stoat's is longer), presence of black hair at the tip of the tail (only on the stoat), and the border between the brown and white portions of the pelt (the stoat's is clear-cut, the weasel's is jagged). Also, in the UK, only the stoat will ever turn white in winter. Unless an extremely rare albino/leucistic weasel turns up, the only white 'weasel' you'll ever find in winter in Britain is the stoat. That doesn't mean, however, that any brown 'weasel' in winter will be M. nivalis. Stoats only turn white if the temperatures drop low enough for long enough (only in the mountains here in the UK). In the rest of Eurasia and North America, however, the weasel breaks the rules and turns white in winter too. Irish stoats (M. erminea hibernica) apparently never turn white.

Next week, T: a verrucose bufonid, a myopic eulipotyphlan and a Bristolian prosauropod.
Posted by m at 23:40

That Scelidosaurus at Bristol may have been my favorite fossil in all the places I went.