Thecodontosaurus has often been nicknamed 'The Bristol Dinosaur'. Its remains were first found in Clifton, near the Avon Gorge, and remains one of the earliest dinosaurs yet to be found in Britain. The remains date to the Late Triassic, a time when dinosaurs were radiating from initially theropod-like forms into prosauropods and basal ornithischians. Thecodontosaurus is either a primitive prosauropod or a basal sauropodomorph. This means it could be ancestral to the first dinosaurs to have become either sauropods or prosauropods (long-necks and not-quite-so-long-necks). 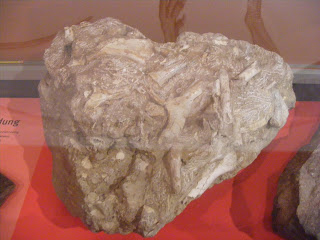 Moles are the third type of 'insectivore' found in Britain (I covered hedgehogs here and shrews here). They are distinctive-looking enough to most people for them to be familiar, despite hardly ever being seen. This probably has something to do with the excellent Wind in the Willows by Kenneth Grahame (also see the next 'T' animal). Moles spend all of their time underground; they are only seen when creating molehills or if they have been killed. 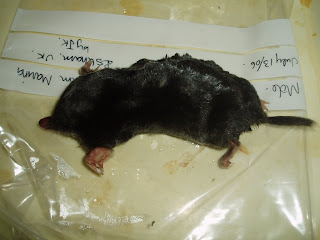 Moles are actually surprisingly small... before seeing one (never seen a live one, only dead ones like this) I thought they were at least hedgehog-sized, but they are really just a large shrew. The first thing one usually notices about a mole is either its claws or lack of eyes. They don't really lack eyes, but they are extremely reduced in size and are hidden under fur, and sometimes skin. The claws are incredible, especially those of the front paw, which are obviously used for digging. 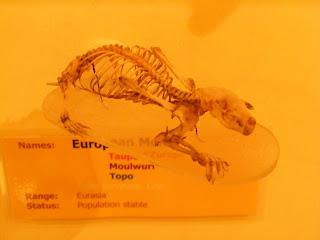 Moles mainly eat earthworms, but will also eat other invertebrates and even other vertebrates. 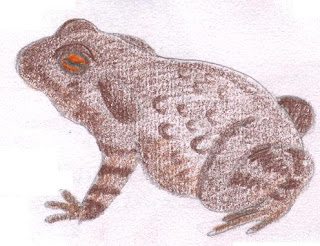 The common toad is, surprisingly enough, one of the most abundant amphibians in the UK, along with the common frog (Rana temporaria). Britain's other toad, the natterjack (Epidalea calamita) is much rarer and extremely localised in distribution. Common toads are found very often in bodies of water of varying size, and even found away from water outside the breeding season. 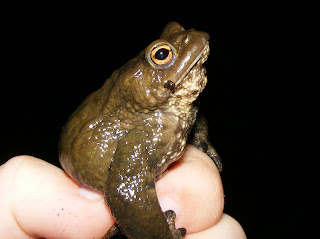 Females are larger than males, and during the breeding season, one can often find pairs in amplexus; this is when the male grips onto the female using 'nuptial pads' (the main method, apart from size, to distinguish the sexes) on his hands. They remain bonded until after the male has fertilised her eggs, which are laid as toadspawn in water. The spawn consists of a double row of black dots encased in a jelly strand. 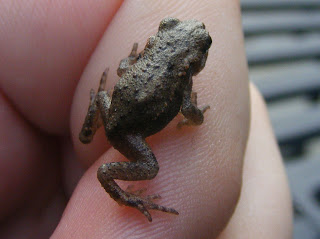 Common toads metamorphose from tadpoles into miniature toads in a few months, and are often found in damp areas. I briefly kept a toadlet last year, which I named Toad of Toad Hall, feeding it on aphids and ants. It didn't really eat the ants, they would just crawl all over it. Aphids, however, it loved. I kept it for a few weeks and released it back into my garden.

Next week, U: an extinct troglodyte bear, a cryptic yet colourful moth, and an auk that lays pear-shaped eggs.
Posted by m at 13:15

Perhaps the ants were too hard to eat? Aphids have relatively soft "hard" parts.