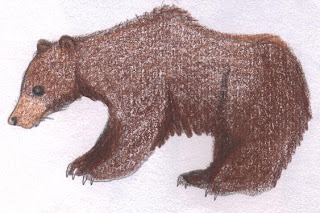 Cave bears roamed Europe, including Great Britain, during the mid to late Pleistocene (within the last million years), becoming extinct some 20,000 years ago. As their name suggests (as does the spelaeus in the specific name), they dwelled, or at least spent much time, in caves. Remains of this species are more often found in caves than the still extant brown bear (U. arctos). Cave bears were similar in size to the largest of the brown bears and polar bears (U. maritimus) of today, having a build intermediate between the two. 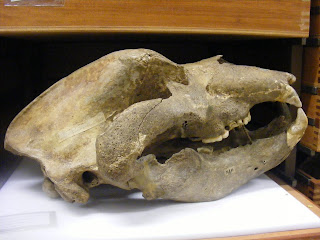 Much can be inferred about the cave bear's diet from its skull, jaw and dentition. Although the zygomatic arches (cheek bones) are huge, inferring that large muscles were attached to them, they probably did not eat a lot of meat. Like living bears, the cave bears would have been omnivores, taking as much, if not more, plant material as they would animal. 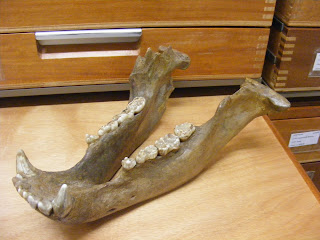 The canine teeth are large, as is the case in almost all carnivorans, but that doesn't necessarily mean it is carnivorous. The insectivorous aardwolf (Proteles cristatus) and the mostly-vegan giant panda (Ailuropoda melanoleuca) have impressive canines, but rarely use them for eating; they are more likely utilised in intra-specific combat only. Note the large diastema (gap) between the canines and the first premolars; this is found mostly in herbivorous animals (such as rodents, lagomorphs and ungulates), as a gap for the tongue to manoeuvre in. The cheek teeth are broad and flat, not being very sharp, perfect for eating vegetation, and sometimes grinding bones.

A very small part of the cave bear's genome has been sequenced; some DNA has been extracted from a 40,000 year old tooth, recovering 21 genes. 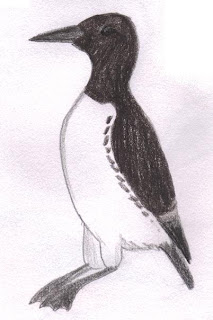 The guillemot, or murre (as it is known in North America), is a slender auk from the North Atlantic and North Pacific coasts. They breed in huge colonies in the UK and elsewhere, being one of the most numerous of all seabirds in Britain. Despite this, I have yet to see a single one. I need to get myself to one of these colonies at some point, the Farne Islands in the North Sea looks like a good place to start.

There are other species of guillemot: Brunnich's guillemot (U. lomvia) is the only other member of the genus Uria; and the three members of the genus Cepphus - black (C. grylle), pigeon (C. columba) and spectacled (C. carbo) guillemots. Interestingly, the two genera are not that closely related, being in two different tribes (a taxonomic rank below subfamily). The distinction is made more clear in North America, by calling only Uria guillemots "murres" and the rest of them are still guillemots.

Another claim to fame for the guillemot is the laying of pyriform (pear-shaped) eggs. The most plausible theory for this is that, because the birds lay their eggs on high cliff faces with no nest, the egg cannot fall off the cliff. A pear-shaped egg will simply roll around in a circle.

I've only ever seen one red underwing moth in my life, and wasn't armed with a camera at the time. In summer, one must have flew into my house through an open window at dusk and couldn't get out. I saw it on a wall covered with cream-coloured wallpaper, so it wasn't very well camouflaged. I intended to usher it towards an open window, so I gently prodded it and it exposed its red hindwings. Had I have been I potential predator, I would have been put off my food by this threatening display. As it was, I was a bit perturbed and backed away. The defence works!

Next week, V: a Wealden hypsilophodontid, an amphibious rodent and a venomous snake.
Posted by Unknown at 11:25

Oh, I do like muerres! I have a grizzly bear skull at home, and it looks much like the cave bear, but obviously smaller, and there's a shorter distance between the canines and premolars. Neither can compete with my favorite bear, though: Arcodus, the short-faced, long-legged hypercarnivorous bear!