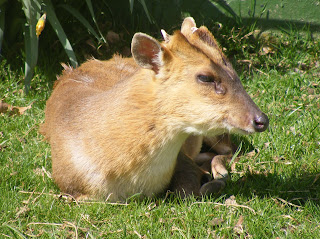 Native to China and other parts of eastern Asia, the Reeves’ muntjac is now one of the most common ‘large’ mammals in the UK. It was introduced some time in the nineteenth century into deer parks like Woburn Abbey (with a great safari park nowadays) and Whipsnade, where the deer now roam freely between exhibits. Males, as seen here, have small antlers with two prongs, but both males and females can be told from other small deer by the black mark on the forehead. This individual (also see last photo of the post) was busy masticating, I think it was chewing the cud. 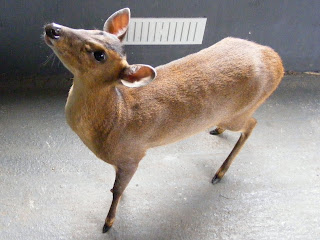 This female muntjac followed me about the park for quite a way; I was quite shocked to see her when I emerged bleary-eyed from the nocturnal mammal area (featuring pygmy lorises, potoroos, spiny mice and bats). In its native Asia, the Reeves’ muntjac seems rarer than its more widely distributed cousin, the Indian muntjac (M. muntjak). Several more species occur in the southeast of the continent, including the leaf muntjac (M. putaoensis) from Myanmar (formerly Burma), discovered only in 1997. The genus Muntiacus extends right back to the Miocene in parts of Europe, as early as 35 million years ago, making them the most ancient of today’s true deer! 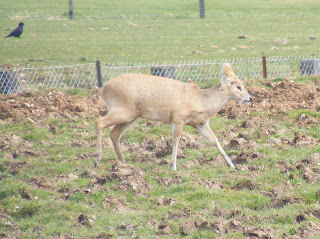 Although all male deer lose their antlers from time to time, when they can often be confused with females, the Chinese water deer never has any. It is a member of its own subfamily, the Hydropotinae, the only subfamily never to have evolved antlers in the first place. Instead, the male Chinese water deer sports fantastic fangs, actually elongated canines, which can be seen clearly in the next picture. 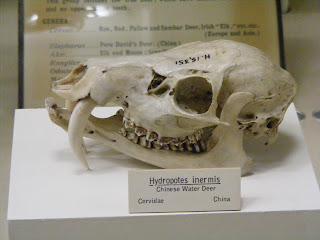 As you can see, not even traces of antlers or pedicels (the part of the skull where the antler grows from) are present. Male Chinese water deer probably use the tusks for intraspecific fighting (fighting between members of the same species). As their name indicates, they are native to China and Korea and frequent swampy habitats; as such, when they were introduced to England at around the same time as the Reeves’ muntjac, they didn’t spread very far and are pretty much restricted to the fenlands of East Anglia (Cambridgeshire, Norfolk and Suffolk), as well as the environs of Woburn Abbey and Whipsnade. There are said to be over 600 Chinese water deer in Whipsnade (source: Wikipedia); however, I only saw two (maybe even the same one twice?) 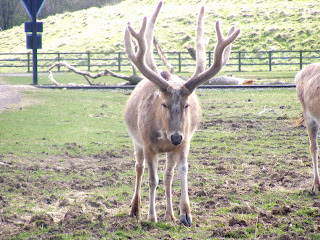 With the exception of the Schomburgk’s deer (Rucervus schomburgki), which is believed extinct, the Père David’s deer is the world’s most threatened species of cervid. It is considered “Extinct in the Wild” by the IUCN, but thankfully there are many captive herds which are breeding successfully, with approximately 800 in ISIS-registered zoos worldwide. Males (not sure whether to call them stags, bucks, harts or bulls – why are there so many terms for male deer?) have impressive, tree-like antlers, as can be seen from the above photo. 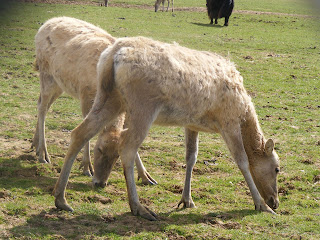 The antler-less females here are showing an adaptation to life in a marshy habitat; the hooves are splayed. The “Père David” mentioned in the name commemorates a French priest who travelled to China to convert the natives to Roman Catholicism. He has many organisms named after him, not only a deer, but also a laughingthrush (Garrulax davidi), a mole (Talpa davidiana, now T. streeti), an owl (Strix davidi), a rock squirrel (Sciurotamias davidianus), a snowfinch (Montifringilla davidiana), a tit (Poecile davidi) and a vole (Eothenomys melanogaster). 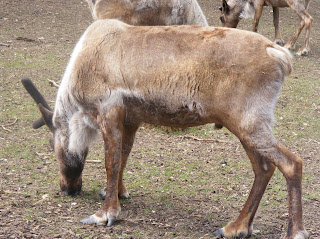 Just like nappies and diapers, taps and faucets, and lifts and elevators, many nouns have different names in the UK and the US. There are three well-known types of deer with this problem, but the problem is exacerbated further. Alces alces is known to all Americans and some Europeans as the moose. It is also called the elk in Europe, especially the countries it inhabits (sometimes the American A. alces are called a different species, A. americanus, but this is irrelevant at the moment). Then there is Cervus canadensis (or C. elaphus canadensis), sometimes known as wapiti, after a Native American name for the animal, or also as elk! I avoid confusion by never using the word ‘elk’.

Rangifer tarandus also suffers with this problem. All youngsters know it as the reindeer from Santa Claus’ favoured mode of transportation and a certain ruddy-nosed individual called Rudolph. This, I have now come to believe, is correct only to refer to R. tarandus from Eurasia, and any in domestication. Those from the tundra and woodland of Canada, Alaska and Greenland are known as caribou. The above animal is not a caribou, but a European reindeer. I hope this is correct, I’m now against using the word ‘caribou’ unless the animal in question is of wild North American origin.

A couple of interesting thing about reindeer (and caribou, come to think of it). When they walk, their hooves ‘click’, sounding a bit like the noise humans do when bending fingers back. This is caused by a tendon locking and unlocking near the toe bones. Just as the Chinese water deer bucks the trend for antlers (pun intended), the female reindeer/caribou also does in that they have antlers like the males. The main reason for this is not to do with intraspecific fighting, but to do with finding food; when the ground is covered with snow and ice, all adult reindeer can use their antlers as snow-ploughs to uncover patches of reindeer moss (actually a lichen, but a favourite winter food for R. tarandus). 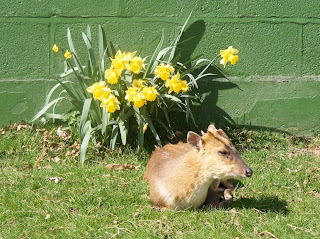 awwww, theeyre adorable
(btw, wikipedia has noow become a non-reliaable source due to issues w. the webpg of my school on wikipedia)

awwww, theeyre all so cuuuuuutee !
(btw, wikipedia isnt a reliable souurce anymore due to an issue/problem tht the wikipedia pg for my school was insulting the principal and students)