Photo of the Day #30: Indian Rhinoceros 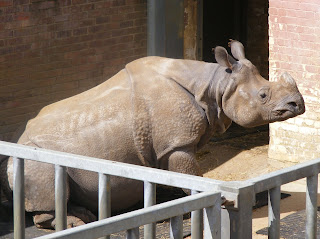 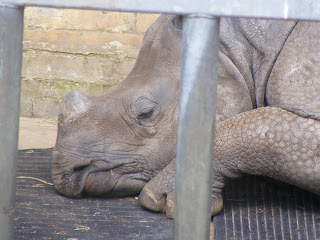 One of five extant rhinoceros species, the Indian rhino, along with the closely related Javan rhino (R. sondaicus) is the only one with a single horn (the 'unicornis' in the specific epithet means 'one horn'). It is classified as a vulnerable species in the wild, distributed in the foothills of the Himalayas from northeastern Pakistan through northern India and Nepal to extreme northeastern India. As such, it ranks fourth in terms of most endangered rhinoceros; only the white rhinoceros (Ceratotherium simum) of Africa is more less threatened with extinction (southern subspecies only, C. s. simum).

Indian and Javan rhinoceroses both share the distinction of having a hide that looks like armour plating. This can easily be seen in the first photo. In the lower photo, however, another individual in the same cage shows the bizarre skin on the rest of the animal, especially the legs, that looks like scales.
Posted by m at 21:08