Photo of the Day #28: Cheetahs 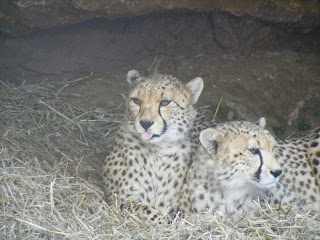 A cheeky cheetah sticks its tongue out while allogrooming its mate's head at Whipsnade Wild Animal Park earlier today. According to ISIS, the cheetahs at Whipsnade are of the subspecies A. j. soemmerringii, which ranges from Lake Chad in the north African country of Chad to Somalia and Eritrea on the north-eastern coast of Africa. Thus it would be genetically different from cheetahs found in most other zoos, which are of the east and southern African nominate race, A. j. jubatus Schreber, 1775, or of unknown race. According to ISIS, which keeps a list of the animals in almost every registered zoo in the world, there are no Asiatic cheetahs, A. j. venaticus Griffith, 1821, in captivity. Private breeding programmes are not considered, however, and there are those probably going on in Iran and neighbouring countries, where the Asiatic cheetah is found nowadays.

I saw lots of animals I've been dying to see and photograph for ages today at Whipsnade, highlights including the cheetahs, European brown bears (Ursus arctos arctos), Indian, or greater Asiatic one-horned, rhinoceros (Rhinoceros unicornis), Pere David's deer (Elaphurus davidianus), wisent or European bison (Bison bonasus), and West African dwarf crocodile (Osteolaemus tetraspis). Photos of all of those, plus more, should hopefully following this in the next few days, if I get the chance! Two whole back-breaking days at work tomorrow and Thursday, plus a lot of interview preparation for a really cool job which I'll tell all about if I get.
Posted by m at 22:34