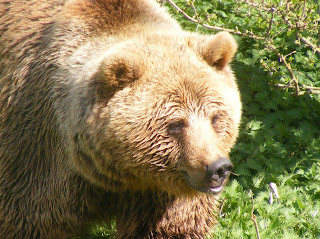 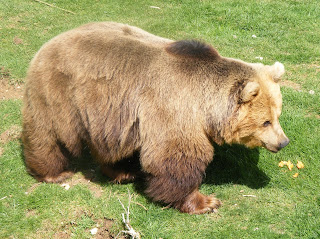 The brown bear, also known as the grizzly, is amongst the most well known of the world's eight extant bear species. The family Ursidae contains five living genera: Ursus, with the brown, Asian black (U. thibetanus), American black (U. americanus) and polar (U. maritimus) bears; Tremarctos, with the spectacled bear (T. ornatus); Melursus, with the sloth bear (M. ursinus); Helarctos, with the sun bear (H. malayanus); and finally the genus Ailuropoda, with the giant panda (A. melanoleuca).

All of the above bears, it might be obvious to state, look bear-like. It has been disputed since its discovery whether the giant panda belongs in this family; the consensus of opinion amongst experts is that it does. Its much smaller namesake, however, the red panda (Ailurus fulgens) is now believed to have a family all to itself, the Ailuridae; it did have several fossil relatives. Extinct members of the bear family include the mollusc-eating Kolponomos, probably looking somewhat like a bear with a walrus' face and a sea otter's dentition; Arctodus simus, the short-faced running bear, was a relative of today's spectacled bear found in ice-age America; Ursus spelaeus and U. fossilis were extinct relatives of today's brown bears from Europe.

The brown bears photographed here originate from Europe. They belong to the nominate race of brown bear, Ursus arctos arctos. The other well known subspecies are from North America, and are the grizzly itself, U. a. horribilis and the oversized Kodiak bear, U. a. middendorffii. In all, there are around twenty recognised subspecies, although far more have been named. They range across the northern hemisphere in three continents, and formerly even in north Africa. The Atlas bear, U. a. crowtheri, lived in the Atlas Mountains of northwestern Africa until the late 19th century. The biggest races are found in Alaska, including the Kodiak from Kodiak Island and U. a. gyas from the mainland, and also in Siberia and Kamchatka in far eastern Russia. Some brown bears have even been known to hybridise with polar bears in the wild where their ranges overlap in the far north of U. arctos' range. Genetic analyses of these bears show something rather odd; there are two groups of brown bears, and the polar bear slots between the two, rendering the species U. arctos paraphyletic.
Posted by m at 20:31

Thanks for sharing some insights about bears, Mo.
I'm glad to see you mention Kolponomos, it is really a strange beast. But it isn't a true bear, it is a member of the family Amphicyonidae, otherwise known as the 'bear-dogs'.
Amphicyonids are known from North America and Asia, and some have been found in Thailand and China.
It's cool how many carnivorans have made it across and back, including the red panda. The oldest fossil red panda is from the Miocene of Tennessee! I still get a kick out of thinking that there were red pandas munching away in the southeast....

Thanks for your comment! I guess I shouldn't rely on Wikipedia too much then for my systematic information; I checked a paper I had on Kolponomos and indeed it says its an amphicyonid. I know far too little about the fossil history of the carnivores, although they are amongst my favourites.

The bear in your picture ir hilariously fat!

Yes! I know! The thought running through my head when I saw the bears was "that doesn't look like an animal who's just come out of hibernation!"