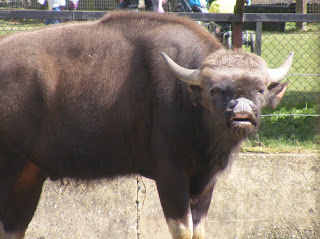 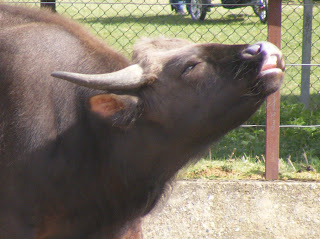 I planned to post this today anyway, but feel it's quite timely as Darren Naish has posted an excellent (as usual) account on this species and another Asian wild ox, the banteng (B. javanicus) on his blog, Tetrapod Zoology. I'm adding a little something different though.

This individual had its head down, feeding or grooming itself, I couldn't tell, but then when he reared his head, I noticed he had pulled his lips back and was grinning in an unusual, but clearly identifiable way. This gesture is called the flehmen response.

The flehmen response occurs in certain mammals, including cats and ungulates, from the German word for 'curling the upper lip', quite an apt description. It occurs in both male and female individuals of such animals. The purpose of the flehmen response is to draw odours into the vomeronasal organ. Also called the Jacobson's organ, the vomeronasal organ is in the roof of the mouth above the palate. It serves the purpose of detecting certain chemicals in the air. Humans have vestigial vomeronasal organs but they have lost their purpose. It is also used by snakes to detect odours in the air; this is what a snake is doing when it flickers its tongue. Technically, it is "smelling" the air, but not using the olfactory senses. Elephants are also known to be able to feel their own vomeronasal organs using the tip of their trunk to gain additional information about what they have touched with it (according to Wikipedia, but unsourced within).
Posted by m at 19:22