I mentioned in the previous post that Guzelyurt Museum of Nature and Archaeology is my least favourite museum of all that I have been to. I admire the fact that northern Cyprus has a museum dedicated to its natural and historical treasures, but I can’t help but feel a little disheartened by the way the specimens look, and the fact that many are misidentified.

Take the following pair of photographs for example: both are of the red fox (Vulpes vulpes), the well known fox from most of the Northern Hemisphere and Australia as well. 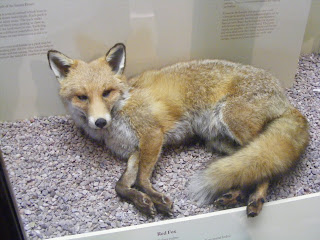 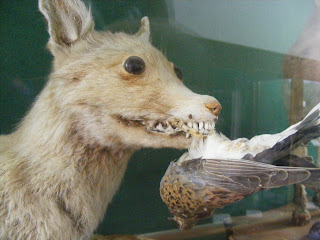 One is a specimen from Manchester Museum, and the other from Guzelyurt Museum. The former is a beautifully presented, almost life-like, image of the fox in a relaxed posture with pristine coat and healthy look. The latter, well, what can I say? My mum was giggling when she saw the poor thing in the museum, and my sister Mini commented on the photo on Facebook, saying the thing would give her nightmares. If the specimen was meant to give the visitor an idea of what a living fox looks like, I think Guzelyurt’s atrocities (there were more than one!) would not get that point across.

Many of the scientific names were incorrect: the names for the lapwing (Vanellus vanellus) and the green sandpiper (Tringa ochropus) were swapped around, for example, two species of very similar eagle were swapped round, and the name on the white pelican’s tag was not Pelecanus onocrotalus, the species native to Europe, but P. erythrorhynchus, the American white pelican. The curator must have fancifully thought the white goose in their collection was a rare snow goose (Anser caerulescens), and not the more bog-standard, every-day domestic goose (A. anser). These mistakes may seem trivial, but for those who don’t know what they are looking at, it can mean being led to believe something which is wrong. I don’t know whether the names on many of the stuffed fishes were correct, as I am not skilled in identifying Mediterranean marine fishes, so I put my faith in the Museum’s label for them, as well as the numerous butterflies and other insects pinned in frames.

I do wonder whether I ought to point these errors out to the Museum, or whether they wouldn’t take any notice, and retort that they don’t get many visitors anyway, and those that do walk round in 20 seconds and go upstairs to the much better presented and more complete archaeology section. My parents are going back to Cyprus in a few days, what do you think readers, should I give them a letter to hand to the curator? They don’t appear to have a website and I don’t have their address either.


Something else to give you nightmares: 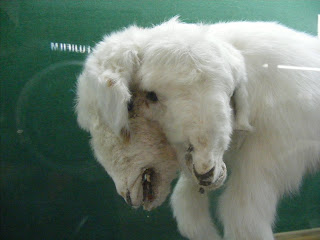 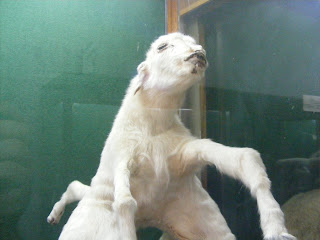 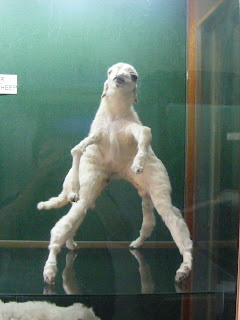 The best specimens in Guzelyurt Museum were the two-headed and two-bodied lamb, the latter of which I nicknamed "Spider lamb", as it does have eight legs. I don't know how common these deformities are in Cyprus, but if they are rare, surely the Museum should advertise and publicise more.

By the way, the title for this post, “Rogue Taxidermy” comes from the term applied to the taxidermy of mythical creatures or made up animals, such as sewing bits of eagles and lions together to create a griffin! I used the term to refer to Guzelyurt’s practice of the art.
Posted by m at 15:45

Rogue taxidermy shows the animal no respect IMO. I will never fiqure out why people do it.

It all gives me the creeps but I still consider it an art. I was just making a post about it to my blog after seeing a photo of taxidermied squirrels posted to a friend's blog about kitschy things. Included this post from you along with other information. WordGrrls.com if you would like a look at the post, tomorrow.