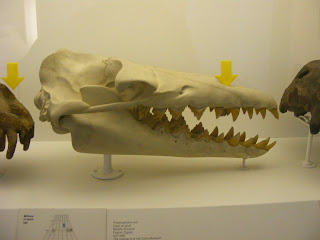 Basilosaurus is an 18 metre (60 foot) long extinct whale from the Eocene of the USA, Egypt and Pakistan. It lived in shallow waters and was a true carnivore with large teeth. I have illustrated Basilosaurus as being coloured like an orca, as that is probably the nearest living analogue to the extinct cetacean in terms of it being a large carnivorous whale. It was first thought to be a marine reptile, hence the name “Basilosaurus”, meaning “king lizard”. It was then realised by the great anatomist and first superintendent of the NHM, Sir Richard Owen, that it was indeed a mammal.

The arrow on the skull (notice the caption says “Prozeuglodon isis”; this is a synonym of Basilosaurus isis) illustrates where the nostrils of the animal would be. They are not at the tip of the snout, like their ancestral ungulates, nor are they at the top of the head, like the derived whales and dolphins of today. The specimen is a cast of actual skull, and is placed in between Andrewsarchus (coming soon!) and Prosqualodon, showing the movement of the nostril from snout to head in early whales and their ancestors at the Natural History Museum.

All modern whales and dolphins today (with the notable exception of this bottle-nosed dolphin) have lost their hind legs; this is most likely to with streamlining of the body for ease of movement in water, a denser medium than air. Basilosaurus still had vestigial hind limbs, as can be seen from the illustration.

I will attempt to draw other marine mammals at some stage, and will soon try Paleoparadoxia tabatai, the desmostylian. That should be fun, although I only know what the skeleton looks like and haven’t seen a reconstruction of one properly before!

Thanks to Brian Beatty for helping me with a few taxonomic issues; this post is for you and any other cetacean-lovers who read this!
Posted by Unknown at 17:22

Wow, A marine reptile, gone mammal. lol. Sir Richard Owen DID make great contributions to Paleontology. I might do post about him soon onmy blog.