What the hell is it? 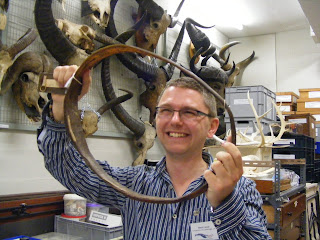 The item being modelled by the very lovely Matt Lowe, curator at the Cambridge Zoology Museum, once belonged to an animal. No, it's not a fossilized belt from a mid-sized theropod. So what is it? Anyone care to take a guess?
Posted by Unknown at 09:52 2 comments: Links to this post

When a fox dies

WARNING: This post contains some images which some may find disturbing. Having said that, they're not that bad, just thought I'd better mention it! 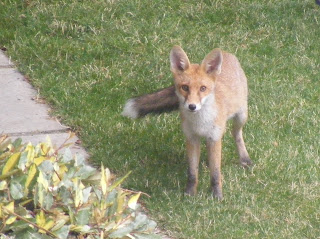 Around two months ago, a red fox died in my garden. I wasn't aware of this fact until a few days after a most bizarre entomological experience. I awoke on a rainy Sunday morning to find well over a million blowfly larvae scattered over the patio. Once the irrational thought of a biblical plague left my mind, I began to think there must be a dead animal somewhere which spawned this mass of maggots. The maggots died or found their way to safety by the evening, but I was still no nearer to finding the cause of this plague.

Some days later, large tufts of tawny-orange fur were discovered in the flowerbed near to where the maggots were found. Later that same day, the body was discovered. The fox had been eaten, and most of what was left behind was skin, fur, bone, and ligament. From the partial carcass, I managed to salvage parts of the forelimb, spinal column, ribcage, and pelvic and pectoral girdles. Also present were parts of the tail and a piece of plastic tubing in the region of the stomach. The hind legs were nowhere to be seen, and were most likely carried off by other foxes, crows, or magpies. I decided to leave the ulnae, radii, metacarpals, carpals, and manual phalanges (forelimbs and front paws), because there was still much flesh and ligament attached to them and it would have been too difficult to extract the bone. Also missing was the skull. 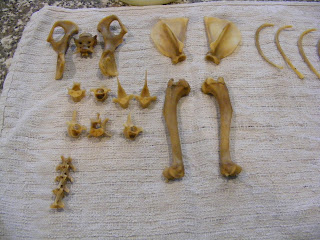 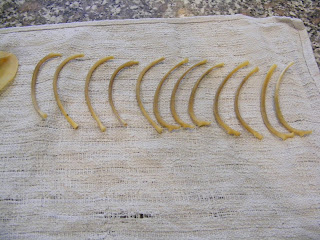 The bones, along with attached soft tissue and cartilage, were placed in a bath of domestic bleach and boiling water to sterilise and colour the bones and detach any soft tissue. They were left in the solution, topped up with bleach every two days, for a week. All of the bones salvaged from the carcass can be seen above, and most can be seen in more detail below. Six pairs of ribs were found. 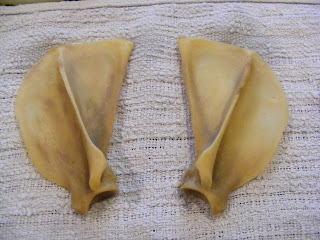 The scapulae (shoulder blades) are heavily ridged for attachment of the trapezius and deltoid muscles of the upper back and shoulder region. 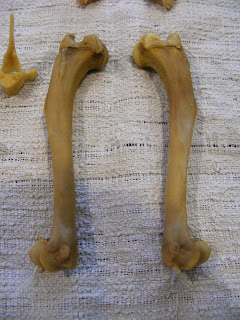 The humeri, or upper arm bones, came apart at the head to reveal spongy marrowbone. I have tentatively glued the heads back to the humeral bodies whilst they bleach further. 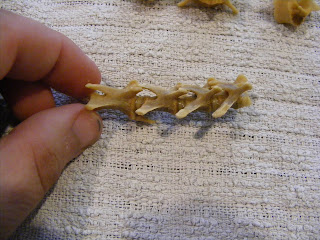 Lumbar vertebrae from the lower back of the fox, with intervertebral discs present in between. 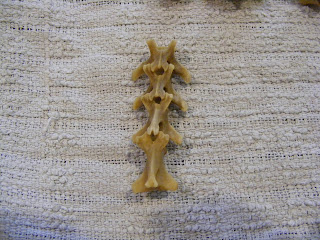 Same vertebrae as above seen in dorsal view 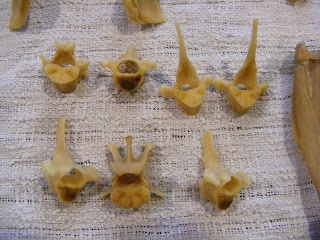 Several thoracic and cervical vertebrae (from the upper back and neck). The large spines on the two bones on the upper right portion of the photo are from between the scapulae where the large muscles are attached. 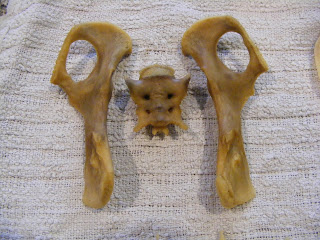 Pelvic bones and sacrum (hips and lower back). The intervertebral disc between the last lumbar vertebra and the sacrum can be seen at the anterior margin of the sacrum.

It was all well and good have this selection of fox bones to study, but what I really wanted was the skull. On the last day of September, whilst searching for a wood pigeon (Columba palumbus) fledgling which had fallen from its nest, I found the skull, mandible, and 4 cervical vertebrae, hidden under a tall Lawson's cypress tree only a couple of metres from where the rest of the carcass was discovered. I stripped off the skin and remembered to take photos whilst the skull was still articulated. I was glad I did this, because after the bleaching process had finished, much of the skull was in pieces, and having a photo of the skull's original condition helped in reconstructing it. 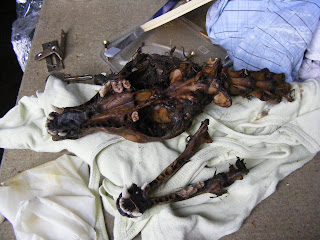 The rather dark skull and mandible, with the skull in ventral view. Much soft tissue was still present around the tip of the snout, with the entire rhinarium (nose pad) intact.

Lateral view of skull, mandible, and C1-C4. The fur can be seen covering parts of the orbit (eye socket), and indeed, during the cleaning process, I found the remnants of the sclera of the eyeball. 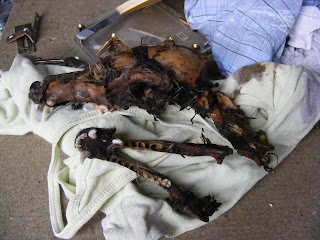 Skull in lateral view and mandible in occlusal view showing the teeth which are still in situ. All twelve incisors and four canines were in place, as well as a few premolars and molars. I placed this specimen in a bleach and boiling water bath, increasing the concentration of the bleach. With daily checks, I could see the bleaching process was working better for the skull than it had for the other bones, as the colour turned from almost black to white in less than a week. The only downside is that all teeth became disarticulated, the rostrum and braincase split up, and both dentaries split at the mandibular symphysis. In other words, it was in bits.

I spent the bulk of two days rearticulating the skull. The braincase was nicely intact, but the ethmoid bone and nasal conchae (bones deep inside the nasal cavity) fell apart, leaving a shower of bony shards all over the place. The maxillae/palatines and premaxillae (see below photo for labels of some bones and teeth on ventral surface of skull), and the jugal bones of the cheek became disarticulated, as did the nasals and lacrimals. The latter bones, of the inside of the eye socket, couldn't be reconstructed, thus there is a massive hole in the eye socket where the lacrimal should be! 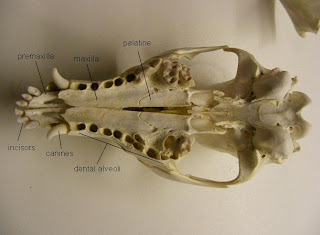 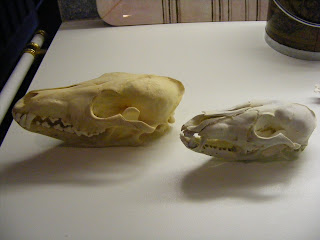 As well as using the photos of the specimen pre-cleaning to help reconstruct the fox skull, I used the skull of a coyote (Canis latrans) I have in my collection. It remains one of my best ever buys, a natural skull with nearly all teeth in place bought on eBay for under £10... anyway, here's a size comparison of coyote on left and fox on right. 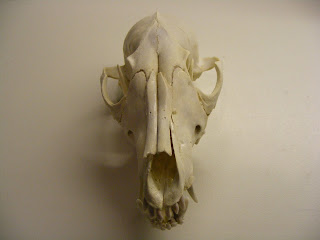 This view of the fox skull shows the nasal bones (the two long bones in the middle) which became so disarticulated that I couldn't put them back properly. They are supposed to "slide in" between the maxillae. 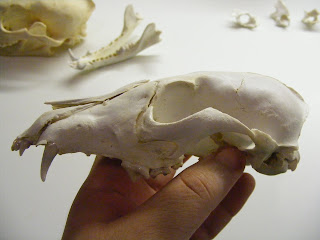 This lateral view of the fox skull shows just how small it is, and it shows the carnassial teeth unique to carnivorans. More on those later. 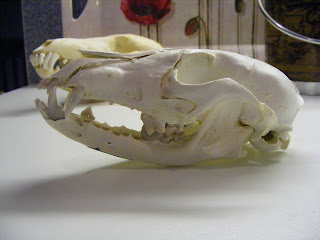 It looks like some sort of rodent with that huge diastema, but I'm glad as many teeth were preserved as there were. 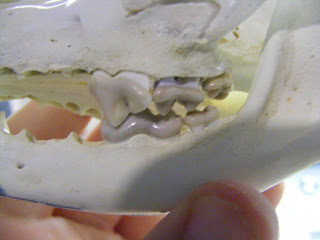 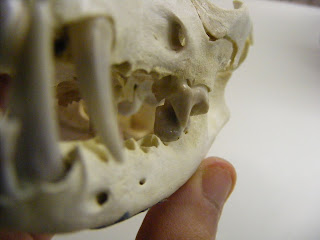 The carnassials are pair of teeth on each side of the jaw which work to cut meat for swallowing. The 4th upper premolar and 1st lower molar have specially adapted cusps which act like scissor blades. In the above photos, you can see how these two carnassials shear against each other so closely. This is the hallmark of the order Carnivora, with only a few types lacking it (such as the termite-eating aardwolf Proteles cristatus and certain pinnipeds). 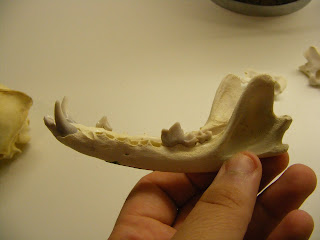 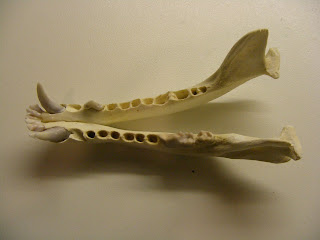 The mandible in lateral and occlusal views. It took awhile to get the two halves of the lower jaw to stick together. 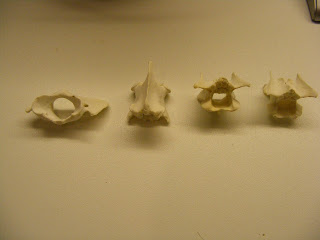 Finally, here we have the atlas, axis, C3, and C4 of the upper neck (I think they're in the correct order, but I could be wrong). The atlas supports the skull, while the axis articulates with the rest of the neck. I have placed the bones from the first find in a concentrated bleach solution to get as white as the skull and mandible have become.
Posted by Unknown at 14:12 1 comment: Links to this post